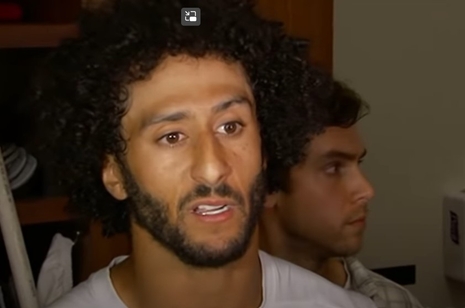 Following Kaepernick’s workout, the video is loaded on his social media, supposedly in hopes of attracting an NFL contract. It’s been six years since the radical social justice warrior has played in the NFL, and none of the league’s teams have given Kaepernick a sniff, but his trainer insists five teams inquired about his client’s fitness after the video went public.

David Robinson, a trainer who has worked with NFL stars like Dez Bryant and Antonio Brown, told TMZ Sports that the NFL teams contacted him for details on Kaepernick’s physical fitness.

“David Robinson -- a famous football trainer who works with some of the NFL's best -- says multiple NFL teams have contacted him to inquire about Colin Kaepernick following a recent work-out he had with the QB.”

Kaepernick is the man who began the kneeling craze during national anthem renditions at sports events, in 2016. He later accused the NFL of colluding against signing him in a lawsuit and settled out of court for millions of dollars. He doesn’t really want to return to the NFL and reap the league minimum salary because he makes a lot more money by playing the social justice warrior/victim’s role. Also, he has frequently bad-mouthed the NFL.

Kaepernick’s radical activism gained him millions of dollars in profits from NIKE endorsements and ESPN and Netflix documentaries. He also released a book of essays calling for the abolition of police officers. He needs NFL pass rushers like the Rams’ Aaron Donald smashing him to the ground like he needs a hole in the head.

In an interview with Ebony Magazine last fall, Kaepernick said he won’t give it up because he believes he can still lead another team to the Super Bowl. That’s the false perception he wants out there, so that when he doesn’t get a chance to play again, the dollars roll in for him as a pariah and victim of racism.

Robinson insists that the NFL teams contacting him “appeared to have a legitimate interest in getting his take on the QB -- after the 34-year-old threw in front of him for several hours at a Texas H.S. last week.”

Robinson told the unnamed NFL teams Kaepernick "definitely has the ability to play on somebody's roster -- like, right now. Like, a couple of the guys that were in the session that were on NFL teams were saying that his arm is just as strong as guys' that we got on our roster right now and can play.

Kaepernick hasn't lost his “fastball,” and still has "a cannon" for an arm, Robinson added.

Kaepernick is traveling the country (that he hates) this month. Though he recently worked out with Lockett, Kaepernick has often had only his trainer available to throw to, and is appealing to more professionals to practice with him. His trainer is not exactly up to the level of pro stars Cooper Kupp and Davante Adams.

Whoever is on the receiving of those passes is all moot anyway. Because it’s all a big publicity stunt, played by an actor playing the role of a victim of racial injustice. As he keeps the big SJW dollars rolling in. Lights! Action! Camera!