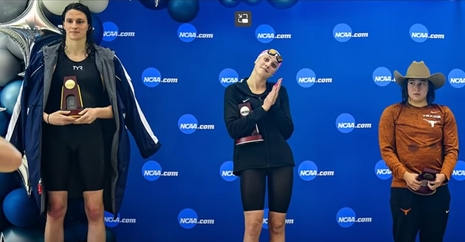 America’s college women’s swimming season is over, but the controversy over transgender fraud Will “Lia” Thomas isn’t disappearing any time soon.

Virginia Tech swimmer Reka Gyorgy sent a letter of complaint to the NCAA, and the Save Women’s Sports coalition was featured in a New York Post story over the weekend demanding fairness.

Thomas (at left, on NCAA victory stand, in photo) won the national championship in the 500-yard freestyle last week, preventing real women from advancing to the finals and relegating them to lower finishes than they would have gained had the NCAA not allowed him to compete. He defeated three U.S. Olympic silver medalists in the process.

“We think everyone should play sports fairly,” Save Women’s Sports told the New York Post on Saturday. The group aims to restore biology-based eligibility and identifies itself as “pro women,” but not specifically targeting Thomas.

Beth Stelzer, an amateur powerlifter and the founder of Save Women’s Sports, says that defending women in athletics shouldn't be seen as a partisan or religious issue. The group protested the NCAA policy of allowing men to compete on college women’s sports teams during the national women’s swimming championships last week in Atlanta.

“We came down here to support the female athletes," Stelzer told Breitbart. "Our intention was to respectfully raise awareness while letting the girls know they matter and that we will hold the line for them.”

Stelzer also noted that Democrats and Republicans are both opposed to unfairness in women’s sports.

Maud Maron is a Democrat and congressional candidate in New York who last week said in a Newsweek op-ed, “It’s Time to Get Serious About Saving Girls’ and Women’s Sports.”

“The unfairness of people born men competing in women’s sports has sparked broad resistance," Maron said. "The simple truth cannot be erased: Every time a person born male takes a spot on a women’s team, a female athlete loses. That’s not fair. It also should not be legal.”

Is that ever true! Gyorgy would have qualified for the finals in the 500-yard freestyle, but the presence of Thomas prevented that. He broke the record in winning that event (4:33.24), then boasted of how easy it was to cruise to victory.

“With all due respect," Gyorgy said in her letter to the NCAA, "I would like to address something that is a problem in our sport right now and hurting athletes, especially female swimmers.”

“I’m writing this letter right now in hopes that the NCAA will open their eyes and change these rules in the future," she wrote. "It doesn’t promote our sport in a good way, and I think it is disrespectful against the biologically female swimmers who are competing in the NCAA.”

The presence of men in women’s swimming “hurts me, my team and other women in the pool,” Gyorgy’s letter continued. She also mentioned how Thomas took away an All-American spot from a deserving woman, demonstrating the NCAA’s “lack of interest” in protecting athletes.

Gyorgy’s letter asked the NCAA to “Make the right changes for our sport and for a better future in swimming.”

Meanwhile, Thomas, who is a senior and finished with college competition, is setting his sights on the 2024 women’s Olympic swimming competition. He’s aiming to take his ill-gotten eligibility for women’s swimming to its highest competitive level. The unfairness never ends in this mad, mad, mad world of woke sports.