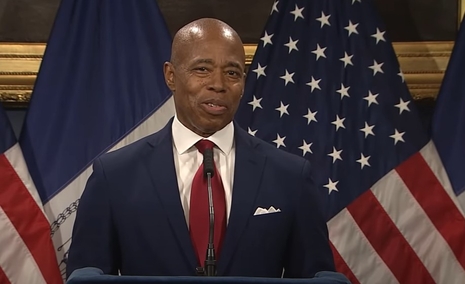 The boys of summer are back. But what about the girls of summer? The Major League Baseball lockout had barely ended Thursday when New York City Mayor Eric Adams rained on its parade the following day. The mayor applauded the end of the labor dispute before making a public pitch for women to play in the majors. During Women’s History Month, no less.

"I’m so glad that the boys of summer are coming back," Adams said at a press conference in the Bronx Friday before launching a gripe. "I hope in the next year we start seeing the boys and the girls of summer. It’s time to allow women to play professional baseball, as well. But I am happy that they are back."

Not a single woman has ever appeared in a Major League Baseball game (where is baseball’s version of Sarah Fuller or Danica Patrick, females who gained gratis opportunities to race Indy cars and play college football at the highest level, respectively, without having proven themselves worthy?).

Not a single woman has ever earned a roster spot with her ability to pitch, hit or field a position.

In fact, the Colorado Silver Bullets women’s baseball team once took on the Class AA men’s all-stars … and lost 19-0. This team debuted in 1994 with the goal of providing “a nurturing environment for top women athletes to learn and play professional baseball against existing men's teams within the ranks of minor league, semi-pro, college, and amateur baseball. Its aspiration was to inspire female athletes to play the game of baseball at all levels, from Little League through professional, and encourage all forms of organized baseball to accept women athletes as players.” The experiment ended in 1997.

The presence of women on big-league diamonds would be pure token-ism, and would mean males who actually merited roster spots would be held back in the minor leagues. That would hurt major league teams and they would never go for such a bizarre stunt.

Adams quickly changed the subject after his sexist complaint about baseball. He said the fact that baseball will not lose its season to a labor dispute will benefit retailers in proximity to Yankee Stadium and the Mets’ Citi Field. He said, "I was up by Yankee Stadium the other day. When people look at all of those shops, they depend on the baseball season, there is an entire economy that feeds off of baseball."

Mayor Adams contrasted the millionaire baseball players on the field to people on much lower ends of income. He said it’s important that food shops will be able to profit off large crowds of fans coming by for games.

Would those consumers still be coming by in huge numbers if the Major Leagues diluted their product quality by focusing on gender equality and lowering the quality of the game? That is a legitimate question.

It’s more likely that any such stunt would be done at the lower minor league levels. Or, in a manner like Fuller kicking the ball a few times for Vanderbilt’s football team in 2020, a woman could be given an opportunity to play for an inning in a meaningless game at the end of the MLB season.