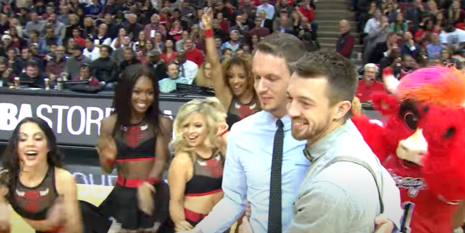 The Chicago Bulls rank first in the NBA’s Eastern Conference basketball standings and in putting on pride nights. Or last in the latter, depending on one's point of view. They’ll show you how basketball should be played and how to stage the allegedly best darn halftime drag show going.

The Bulls enlisted “one of Chicago’s most talented drag queens to pull off a tribute to great moments in LGBTQ history,” Ken Schultz wrote of the bizarre event on Outsports earlier this week.

The Bulls have been one of the biggest stories in the NBA this season, Schultz went on. “After showing other teams how it’s done on the court for the past three months, last week, the Bulls also set an example for the rest of sports about how to take a Pride Night celebration to the next level.” Wow, what an awesome fete to present to families in the arena.

Chicago didn’t just display a rainbow logo at center court, but went “all out in celebrating and embracing LGBTQ culture. The end result was a halftime show to remember.” To Schultz. The rest of us will be trying to forget.

Brace yourself; this won’t be pretty.

Team mascot Benny the Bull served up “bovine fabulosity realness taking the court in a rainbow wig and tux.” He was flanked by the Luvabulls dancers adorned in rainbow colors. They performed a choreographed routine to make it “a full-on celebration of the LGBTQ community.” (See file photo of 2016 Bulls’ pride night above).

The Chicago Tribune Bulls beat writer Laura Poe gushed on Twitter about how Benny the Bull pretended “to officiate a gay wedding at center court with a drag queen presiding over the event.”

According to Poe, the drag queen taking part in the Pride Night wedding dance was Queen of the Universe contestant Aria B. Cassadine. The sordid show included “highlights” (Schultz’s words) of LGBTQ history from the 1969 Stonewall riots in New York to the U.S. Supreme Court’s 2015 Obergefell v. Hodges decision legalizing same-sex marriage, on the Jumbotron.

Completely partial in the culture wars and oblivious to how confused young children in attendance were by all these shenanigans, the Bulls issued a news release stating: “The purpose of the show was to commemorate the LGBTQIA community’s contribution to pop culture, music, and fashion and highlight drag—an authentic art form of the gay community.”

Forcing this outrageous "art" on all the fans present is highly questionable. However, one thing is undeniably true. The Bulls’ halftime show was a real “drag” on the culture, a steeply downward drag.