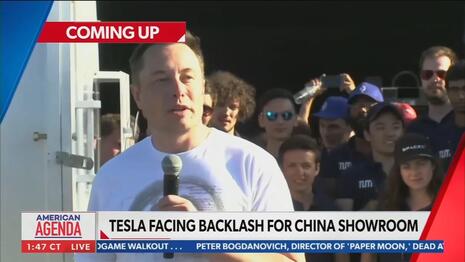 Last week, China fanboy/parasite Elon Musk got verbally slapped down by NBA player Enes Freedom Kanter for sucking up to China. Completely overlooking China’s innumerable human rights abuses, Musk opened up a Tesla showroom in China's Xinjiang province, drawing the ire of the Boston Celtics’ center Kanter, who has been waging an ongoing campaign against China.

Those monster profits from China evidently look just as good to Musk as they do to LeBron James, Nike and the NBA. All of whom enjoy doing business with China, despite one of the world’s worst human rights records.

Regarding Musk’s showroom in Xinjiang (the province which contains what many view as modern-day concentration camps), Kanter tweeted:

Shame on Elon Musk for supporting the Genocide Shortly after the U.S. passes the Uyghur Forced Labor Prevention-Act aimed at stopping the slave labor Elon Musk turns a blind eye to the Cultish Communist Party's abuses & has opened a showroom in #Xinjiang. What a parasite

Buddying up with China is nothing new for Musk, as Breitbart's Warner Todd Huston pointed out. In 2019, the nutty Musk declared China the future for humanity. Which humanity he was talking about was a mystery because the words China and humanity don’t belong in the same sentence. Musk said of China’s work with renewable energy:

This is extremely impressive like my hat is off you know you guys rock, so I’ve never seen anything but so fast in my life before. To be totally Frank I’ve seen some crazy things, so you know I think it’s like I really think China is the future.

A year later, Musk called Americans “entitled” and “complacent. But the Chinese were praised as “smart, hard-working people.”

Maybe this has something to do with re-education and slave camps for those who fall out of favor with China’s dictators:

The energy in China is great. People there – there’s like a lot of smart, hard-working people. And they’re really — they’re not entitled, they’re not complacent, whereas I see in the United States increasingly much more complacency and entitlement especially in places like the Bay Area, and L.A. and New York,” he said after the communist giant opened its doors for his ventures.

Fanboy Musk also credited China with its people’s happiness, indicating he must have a warped sense of what constitutes that human emotion.

The U.S. House of Representatives, in December, passed the Uyghur Forced Labor Prevention Act nearly unanimously. Uyghurs are a Muslim group of people forced into slave labor in China.

Kanter, who has far more to lose than the billionaire Musk, is also carrying out his crusade to expose the world’s dictators throughout social media. He's posted on Twitter that he aims to be "the voice of all the innocent people out there who don’t have a voice and it will exhibit all the human rights abuses and crimes committed by Dictators. Freedom! It’s not given, it’s taken."

Not only did Musk unveil his autos in China, he also engaged in bizarre dance moves on the showroom floor, which he found quite hysterical. Maybe acting like a crazy bat constitutes some of the China version of happiness.