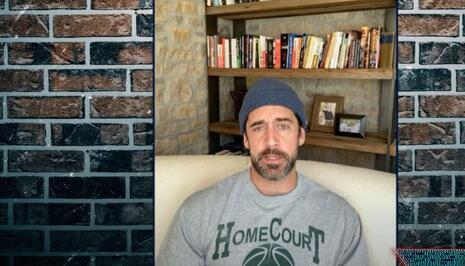 Green Bay quarterback Aaron Rodgers on Tuesday became the latest celebrity to speak out against cancel culture. A blight on the nation, cancel culture is part of a soft society that attempts to shrink and silence people, the Packers’ quarterback observed on the Pat McAfee Show.

During his offseason feud with Green Bay, Rodgers took time away from football and skipped the team’s mini-camp. People got angry with him, and he said he became a target of “PC woke culture.”

On the McAfee Show, Rodgers began speaking about comments he made to Chicago Bears’ fans Sunday, when he said he’s owned their team throughout his career. He then segued into his comments about political correctness and the woke culture:

I like to speak the truth and I’m not a part of this woke cancel culture that gets off on trying to silence people all the time.

There’s a PC woke culture that exists. And there’s a cancel culture at the same time and it’s based on people’s own feelings of maybe personal miserability or distaste for their own situations or life or just the enjoyment of holding other people down underneath their thumb.

The quarterback said American society is “soft” and intolerant of people’s right to disagree. He criticized how people can’t have “back and forths” disagreements without somebody feeling offended. He went on to say:

There is this culture that exists, that gets off, I think, on shrinking people, keeping them small, keeping them in a box, quieting them through cancellation or demeaning comments.

I also exist outside of that in a different realm where I do feel confident in things I say and I do stand by what I do.

Plenty of athletes and coaches have been canceled by the woke mob. Raiders coach Jon Gruden just got run out of the NFL for 10-year-old quotes. Buffalo quarterback Josh Allen was marginalized for social media comments he made as a teen-ager in 2012. So did Donte DiVincenzo, MVP of the 2018 NCAA Tournament championship game, for remarks made in 2011. So did baseball pitcher Josh Hader, in that same year. Tim Tebow has been cancelled, trashed and demonized more times than one can count, over his Christian faith.

Clay Travis, co-host of the Excellence In Broadcasting radio show along with Buck Sexton, said on Fox News that Rodgers is cancel culture-proof. However, he said, “I do think that this woke culture represents the antithesis of everything that sports stands for — the meritocracy, excellence and being able to speak your mind are all to me firmaments of the sports culture.”