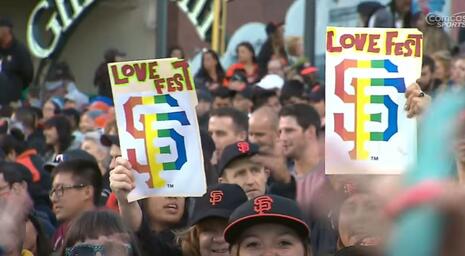 Peripheral topics scarcely related to the Major League Baseball playoffs are all the rage at SB Nation’s LGBT-obsessed Outsports blog. Writer Ken Schultz has ranked all 10 playoff teams according to their rainbow swag, and it’s no surprise that a Bay Area team emerged No. 1 on his pinkish list.

The San Francisco Giants earned the most love from Schultz, who admits to singing hosannas to them this summer for their “amazing Pride caps.” The team donated its Progress Pride cap to the Hall of Fame in Cooperstown and that means they “should finish No. 1 on this list,” he says. “If it’s good enough for Cooperstown, it’s good enough for me,” Schultz raved.

Though they were eliminated last night by Boston in the American League playoffs, the Yankees placed 10th on the Schultz list. They offered no giveaways on their Pride Day in June, not even a poster of Lou Gehrig wearing a loin cloth. However, the Yanks feature a permanent LGBT fixture in their Monument Park in honor of the Stonewall riots, a 1969 police raid on a homosexual bar that led to six days of rioting. The LGBT plaque is woefully out of place in its close proximity to those honoring Babe Ruth, Mickey Mantle and other greats of Yankees lore.

The Atlanta Braves rank No. 9 for a “unique” giveaway – a Pride cooler bag, earning an “extra point for not putting a tomahawk on it.” A tomahawk would obviously project too much toxic masculinity to the non-binary crowd.

Speaking of Houston, the Astros checked in at No. 7 merely by offering LGBT hoodies.

The sixth-ranked Boston Red Sox Progress Pride flag is ”one of the most inspiring symbols ever created,” Schultz beamed. It’s a guaranteed winner, like sending Ted Williams to bat in the ninth inning.

The No. 5 Tampa Bay sunburst pride fanny pack is perfectly designed for rainbow colors and looks like “a literal explosion of LGBTQ Pride.” Milwaukee rated No. 4 with a rainbow fanny pack.

The Los Angeles Dodgers merited third place on the Schultz list by adding rainbow colors to their pride t-shirts.

The No. 2-ranked Chicago White Sox stepped up their LGBT game by collaborating with a queer artist to create an original giveaway look. It’s a pride T-shirt designed by Art Institute-trained LGBTQ advocate Nina Palomba. It features a “joyful” baseball drawing of a Sox uniform reminiscent of their “Field of Dreams” game throwbacks.

All of this may seem trite and trivial, but it’s a subtle move by the alpha bet people to let professional sports know they’re under a microscope and expected to keep pleasing their needy LGBT masters.