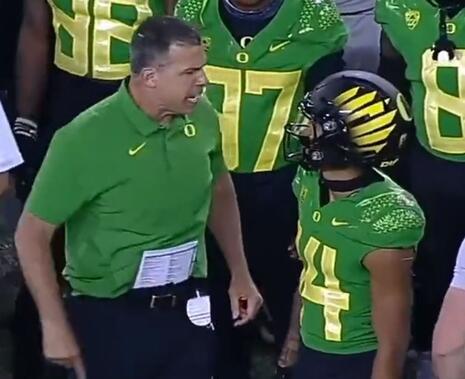 Caution, football coaches. You’re now being scrutinized by ESPN race cops for the skin color of the players you’re berating. Ask Oregon Coach Mario Cristobal. He chewed out Kris Hutson for celebrating after making a big play, and ESPN’s Rod Gilmore made the player’s race a big issue.

Hutson’s showing off after a pass reception resulted in the play being negated and an unsportsmanlike penalty, moving the Ducks back out of field goal range.

“Too much,” Gilmore complained. “I think that goes a bit too far. Let’s not embarrass the young man on national television.”

“Kid has 5 catches all year, makes a nice grab, spins the ball after catch, costs Oregon. ‘This is a bit too much’ is insane commentary. Credit the kid too, he looks MC in the eye and says ‘Yes sir’ ”

These remarks sent Gilmore into full racialization mode. In response to Gottlieb, he tweeted:

“Moreover, the image of a 51 year old White man berating a young Black man so publicly rubs a lot of us the wrong way. Especially w/all the racial injustice. Bad optics. U can deliver the lesson w/o flexing your power & control. It did not make Black parents I know happy.”

It's not clear where Gilmore has been for the last umpteen football seasons. Coaches have been yelling at white, black, red, brown, Samoan, Asian players for making mistakes on the field forever. Why is it now an issue? Well it’s the Black Lives Matter era now.

Outkick blogger Bobby Burack admonished Gilmore because Coach Cristobal is actually Cuban. “So Gilmore’s race-baiting is off to a rough start. Second, and I ask this often, what does skin color have to do with anything?”

Burack explained the situation well when he said Gilmore was just following the left-stream media’s kneejerk reaction narrative. If a white person does something even “remotely untoward” toward a black person, call it out as race. Immediately, whether it’s actually racism or not.

In other words, it’s not a person’s behavior or words that count most. It’s the color of the person’s skin. Oh, for a world in which people are judged not by skin color, but by the content of their character. A famous black person once said he wished for that.