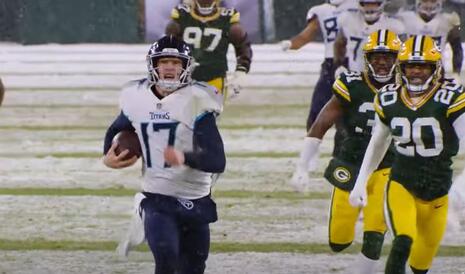 Tennessee Titans quarterback Ryan Tannehill was not planning to get the COVID-19 vaccine. However, he has backed down out of fear that the NFL will make his life miserable if he refuses to get the shots, and he’s getting the vaccine.

Many are roasting the NFL for his draconian vaccine-or-else pressure. Arizona Cardinals wide receiver DeAndre Hopkins even suggested he may end his pro football career over being made to get vaccinated.

On the flip side, Vanity Fair thinks the NFL imposing the choice on athletes is peachy-keen. Its headline declares "The NFL Is Setting the Standard for COVID Vaccine Crackdowns."

In praising the NFL’s edict, Vanity Fair’s Caleb Ecarma wrote about how the league is using threats to overcome its “COVID vaccine hesitancy problem”:

Retaliating against vaccine holdouts, the NFL on Tuesday warned that unvaccinated players will be fined $14,650 each time they violate COVID-19 safety protocols and restrictions. Players who refuse to undergo COVID tests will be fined $50,000.

Thus Tannehill’s (seen on TD run vs. Green Bay in 2020 above) reticence about the league making his life difficult: “I’m currently in the [vaccination] process right now,” he told reporters. “The NFL has kind of made it clear what they want to happen. If you don’t fall in line, they’re going to make your life miserable with all the protocols.”

It’s not just the league that threatens to make players’ lives miserable for refusing vaccines. It’s the media, too. Buffalo Bill wide receiver’s Cole Beasley has been described by NBC’s Pro Football Talk as an agitator for his strong opposition to guidelines he considers over-reaching.

While no one’s being forced to wear a scarlet letter on their uniforms, the Pittsburgh Steelers and Tampa Bay Buccaneers are requiring the unvaccinated to wear bracelets during practice.

Tannehill gave in to vaccines under protest. He said he would not “have gotten the vaccine without the protocols that they are enforcing on us. I think it’s a personal decision for each of us. They are trying to force our hands and ultimately have forced a lot of hands by the protocols. It is what it is.”

NBC reported Thursday that 88 percent of NFL players have gotten at least one vaccine shot so far, compared to the national average of 70 percent.

Numerous athletes have tested positive for COVID despite having been vaccinated, as you can read about here and here.