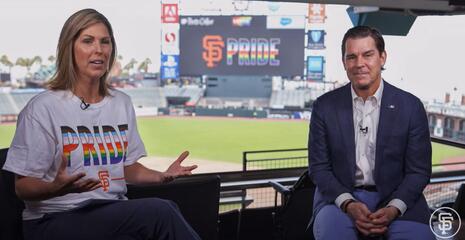 Professional sports and the media who cover them just couldn’t impose enough LGBT propaganda on you in the recently completed month of June. It was overkill to the max. Everywhere a sports fan looked -- you guessed it -- pride, pride, pride!

Carl Nassib, an NFL player for the Las Vegas Raiders, sprinted out of the closet to worldwide fanfare. Chelsea Wolfe, a man despite the female name, qualified to be an alternate on the U.S. Olympic women’s BMX team for the Summer Games at Tokyo. Major League Baseball was on fire for pride month, and the San Francisco Giants wore pride uniforms.

The SBNation Outsports blog crowed that baseball stadiums “lit up in rainbow colors, professional teams and leagues changed their logos to rainbows and the NFL said, unequivocally, ‘football is gay.’” An NFL video also said football is “lesbian, transgender and queer.” Somewhere, Bronco Nagurski is turning over in his grave. Furthermore, several professional wrestlers said they are one variety of LGBT or another.

On the media side, CBS Sports went all out, and I mean “out!" The network literally wrapped itself in a rainbow flag during pride month. Mainly, CBS did this by airing a series of programs called Out in the Game — to honor LGBTQ people involved in sports in some way.

What people’s sexual orientation has to do with baseball pennant races, basketball playoffs, track and field or wrestling isn’t clear. Although Michael DeFusco, a creative director for the CBS Sports’ marketing department tried hard to justify his excessive pride vision.

“It was a big deal for me personally as an LGBTQ employee to pitch an idea that was well-received by all levels,” said DeFusco, adding that their “vision” consisted of “pride and inclusion where we led the conversation as a sports division that, in sports, LGBTQ athletes are athletes first, and we need to acknowledge them.”

It certainly appears the opposite is true: that they are LGBT first, athletes second.

DeFusco also said that LGBT athletes would inspire youth who are “struggling to find their place in the sports world.” There’s a better word for this -- indoctrination. Aren’t children already getting more than enough of that in public schools and the greater culture? Must it also needlessly saturate the sports world? Professional sports are already nose-diving in public approval due to unrelenting "wokeness" -- whatever that's supposed to mean this week.

"I am always so proud of our WE NEED TO TALK shows but especially after the Pride show, which was thoughtful, insightful and overall fantastic," Smith said. "I am proud to be a member of the ViacomCBS family."

It may well be time for another public approval survey for pro sports after June’s obsession with pride month.