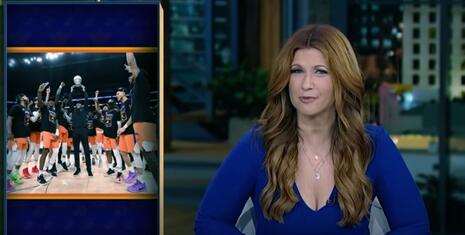 All the woke social justice activism that goes with being the public relations adviser for LeBron James is wearing down Adam Mendelsohn. So much so that he admitted he needs to check his white privilege at the door because white men are a problem.

Mendelsohn’s confession at the altar of political correctness came in a round-about way. His supposedly inappropriate comments were revealed when a 2020 discussion between him and ESPN’s disgruntled NBA program hostess Rachel Nichols were leaked to the press. She’s been in the news for days for saying she was benched for the NBA Finals by ESPN because she’s white and her masters wanted the black Maria Taylor to shill for diversity.

The New York Times reported that Mendelsohn was heard in a telephone conversation telling Nichols: “I’m exhausted. Between Me Too and Black Lives Matter, I got nothing left.”

Nichols can also be heard on the tape telling Mendelsohn, “There isn’t just one seat at the table for a minority of whichever version this week we’re trying to please.”

To which Mendelsohn responded by also slamming ESPN for its alleged white male problem, replying, "If you think about it, this is precisely the problem we’ve been talking about for a long time, which is white men - it is an example of the one Black person in the boardroom...You don’t get to have a Black woman in a prominent spot and feel like, OK, the whole work is done.”

Now, like a good leftist when caught straying from the plantation, Mendelsohn has realized the error of his ways, and that an apology will require the self-flagellation that restores infidels to the good graces of the cancel mob. His my-bad mea culpa, emailed to CNBC, reads:

“I made a stupid, careless comment rooted in privilege and I am sincerely sorry. I shouldn’t have said it or even thought it. I work to support these movements and know that the people affected by these issues never get to be exhausted or have nothing left. I have to continue to check my privilege and work to be a better ally.”

CNBC called Mendelsohn a “communication powerhouse maven” who made “blunt” comments to Nichols. Mendelsohn has served for more than a decade as the public relations adviser to LeBron James, a loose cannon and public relations nightmare himself. In 2020, Mendelsohn co-founded James’ More Than A Vote group that sought to help lift Joe Biden to the presidency. He evidently has not persuaded James to acknowledge the Chinese Communists’ brutal oppression of the slave laborers helping to make LeBron a very, very rich man.

But while Mendelsohn certainly hasn’t been able to reign in his boss, he can control himself, and now hopes to have weaseled himself back into the good graces of the Left for his painful indiscretions.