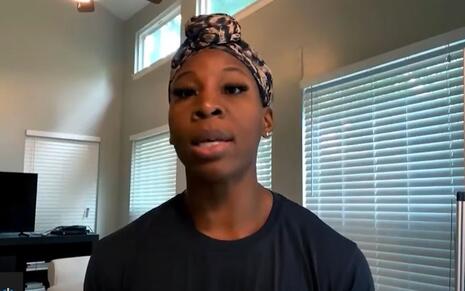 Embattled U.S. Olympic hammer thrower Gwen Berry is getting blowback for vilifying America as a nation of so-called “systemic racism.” She repeated that claim in a Black News Channel (BNC) interview, and a University of Michigan professor is disputing her spurious claims.

Berry turned her back on the flag during the national anthem at last week’s U.S. Olympic track and field trials in Eugene, Oregon. Then she covered her face with an “activist athlete” shirt, sparking national outrage.

“My purpose and my mission is bigger than sports,” Berry said in the BNC interview. “I’m here to represent those … who died due to systemic racism. That’s the important part. That’s why I’m going. That’s why I’m here today.”

The U.S. hammer thrower claims she “never said that I hated the country. I never said that. All I said was I respect my people enough to not stand for or acknowledge something that disrespects them. I love my people. Point blank, period.”

Berry criticized the Star-Spangled Banner because it allegedly glorifies slavery. Especially catching them and beating them:

“If you know your history, you know the full song of the national anthem, the third paragraph speaks to slaves in America, our blood being slain…all over the floor. It’s disrespectful and it does not speak for Black Americans. It’s obvious. There’s no question.”

The national anthem lyrics in question say: “No refuge could save the hireling and slave. From the terror of flight or the gloom of the grave, And the star-spangled banner in triumph doth wave. O’er the land of the free and the home of the brave.”

At least one academic believes Berry doesn’t know what she’s talking about. He’s Dr. Mark Clague, an associate professor of musicology, American culture, and African American Studies at the University of Michigan. He says those lyrics speak to the “threat directed at the African American slaves who defected to the British during the War of 1812 in order to attain freedom.” Francis Scott Key, who wrote the Star-Spangled Banner, was disparaging British slaves, not African American slaves. Dr. Clague told the New York Times:

“The reference to slaves is about the use, and in some sense the manipulation, of black Americans to fight for the British, with the promise of freedom. The American forces included African-Americans as well as whites. The term ‘freemen,’ whose heroism is celebrated in the fourth stanza, would have encompassed both."

Or it may have been addressing mercenaries ("hirelings") fighting for the British, as the Hessians did in the War for Independence, and it may be referring to British subjects as slaves: a hyperbolic but common sentiment among Americans just a generation removed from the Revolution.

Regardless, is it any wonder that woke athletes don’t know our history of the British forcing slavery on the American colonies? When the left-stream media, schools and the 1619 Project are pushing critical race theory and distorting our history? N-O.

Right. Woke activist athletes should be at home while Americans with pride in their country are representing the greatest country in history next month in the Tokyo Summer Olympics.