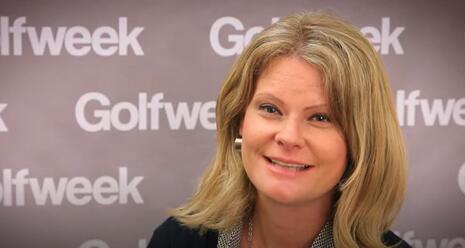 Men are muscling their way into another women’s sport, and female golfers stand to eventually get pushed out of the money. Hailey Davidson underwent so-called gender reassignment surgery in January, and a few days ago, he drew praise from Golfweek for winning a women’s professional golf tournament.

Golfweek’s Beth Ann Nichols hailed the incursion of a man into a women’s sport. Make no mistake about it: Davidson aims to play on the LPGA tour.

“It was, by all accounts, an unforgettable day for Hailey Davidson,” Nichols wrote.

Nicholas added that, “[o]n May 13, Davidson drained a 5-footer for par on the 18th hole to win her first professional title” and thus robbed LPGA player Perrine Delacour of the victory. “That same day she also received an email from the USGA stating that she’d met the organization’s Gender Policy eligibility criteria and can now compete in its championships. She hopes to soon hear similar news from the LPGA via a reciprocity agreement.”

Heather Daly-Donofrio, the LPGA’s chief tour operations officer, said her organization is reviewing Davidson’s application to participate in LPGA Tour events under its gender policy. The LPGA voted to eliminate its requirement that players be “female at birth” several years ago when a transgender player sued the association.

The USGA revised its trans policy this year so trannies don’t have to wait two years after surgery to qualify. Davidson is also eligible to compete in National Women’s Golf Association events. Mianne Bagger is a transgender golfer from Denmark who plays in European tournaments. So the march of arrival of trans golfers is here, and pro golf associations obviously don’t care a wit about the integrity of women’s sports.

Davidson said she’s lost 9 mph in swing speed and hits the ball 30 yards shorter off the tee since taking hormonal treatments. She no longer lifts weights and claimed, “[a]ny advantage that existed is fully gone.” Crowing about intentionally zapping his strength is not something a man should be boasting about.

A 2019 study published by The Journal of Clinical Endocrinology & Metabolism concluded that men maintain their male muscle strength, size and composition.

With professional sports organizations giving transgenders a wide-open door to compete – and dominate – against women, and without media objectivity on the controversy, women are sure to suffer from unfair playing fields. In golf and other sports.

As a point in fact, the sports media are more agitated about Tim Tebow signing a contract with the Jacksonville Jaguars than they are about men exploiting opportunities to diminish women’s sports. Outside of The Washington Times, it’s difficult to find any criticism of Davidson’s emergence in women’s golf. On the other hand, numerous writers and broadcasters have had a cow over Tebow’s return to pro football.