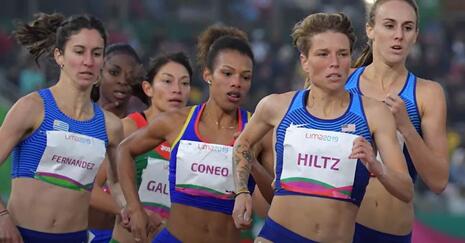 That trans athlete explosion the world has been bracing for, the one LGBT activists keep denying? Well, it’s here now. There may be as many as nine trans women (biological dudes) bursting onto the Olympic stage in Tokyo this summer, all of them threatening to take medals away from actual women.

SBNation Outsports is constantly berating U.S. states for passing “unnecessary” bans on males competing on women’s sports teams. It’s a solution in search of a problem, they say. The two-faced site is now openly cheering on several confused men aiming to take Olympic medals away from women.

This weekend, Outsports revealed that the Summer Olympics could go from no trans athletes in all the past Games to nine this year. Including three possible male qualifiers for the U.S. Olympic women’s teams.

Hiltz is competing in the 1,500 meters, and Telfer is a sprinter who won an NCAA Division II championship at the expense of female rivals. Outsports expects Wolfe to either make the U.S. team or to be an alternate.

Hiltz is a six-time NCAA Division I all-American in men’s middle-distance running events. On March 31 of this year – the International Transgender Day of Visibility -- he announced he had magically become a “non-binary transgender.” He began his college track career at the University of Oregon in 2014, then transferred to the University of Arkansas in 2016. Hiltz has been running for the Adidas track team for three years and won the Pam American Games mile run in 2019. He once tweeted:

While the queen dude Hiltz is wrestling with his identify, it would be a very good idea if the U.S. Olympic and Paralympic Committee excluded him from the women’s Olympic trials. Come June 18, if Hiltz finishes among the top three milers at the trials in Eugene, Oregon, he will be a member of the Olympic women’s team. Keeping a real woman off the team.

Schultz says Telfer has an uphill battle qualifying for an Olympic sprinting appearance. The Jamaican-born man became the first transgender NCAA track champion in 2019 (winning the 400-meter hurdles), while competing for the Division II school Franklin Pierce. Telfer made the national spotlight when then President Donald Trump committed the horrible sin of mis-gendering him. ESPN’s “Outside the Lines” featured him, too.

Telfer told Outsports that testosterone gives him no advantage over women competitors. Also, his 6-foot-2-inch height is a disadvantage because it creates more wind resistance than shorter women rivals face. Yeah, right.

The non-U.S. men hoping to take women’s Olympic competition by storm include:

Welcome to the wide, wacky world of alphabet sports.