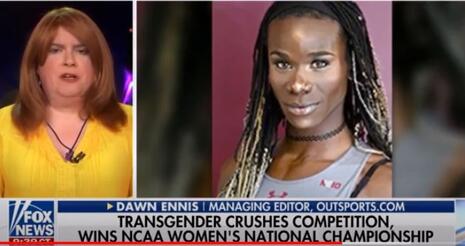 Boise, Idaho, you can kiss your inclusion in March Madness next spring good-bye. The NCAA prefers a different version of inclusion for its host sites, one that doesn't ban males from participating in female sports like Idaho does. College sports fans, trans inclusion is rolling down the tracks and little can stop it.

SB Nation Outsports reports that the NCAALGBT hasn't yet rescinded its agreement for NCAA Tournament games in Boise, but the sport's governing association is in the tank for transgenders.

Outsports writer Dawn Ennis (appearing at left in photo with trans runner Cece Telfer on Fox News) says the NCAA is calling it “premature” to yank Division I Men’s college basketball tournament games, scheduled for March 18 and 20, from Boise. A pending ACLU lawsuit against Idaho's commonsense law and the coronavirus are causing the NCAA to wait and see what happens before it acts.

But no one needs to guess where things are heading. Because Outsports reports that the NCAA recently held a summit to build the case for promoting increased gender identity and inclusive student-athlete participation.

A few days ago, the NCAA Board of Governors issued a statement indicating that a trans explosion upon the college sports scene is only a matter of time:

"The summit sought feedback about creating a framework that could inform policy and practice development in the area of gender identity and participation in collegiate sport, with a focus on inclusion, fairness, student-athlete well-being, health and safety."

Last June the NCAA released a statement condemning the Idaho law, calling it “harmful to transgender student-athletes and conflicts with the NCAA’s core values of inclusivity, respect and the equitable treatment of all individuals.”

Furthermore, the NCAA employs a managing director of inclusion, Amy Wilson. She insists the association is exploring ways for student-athletes to support their well-being. Not fooling anybody, it's transgenders student-athletes that she's referring to.

Want more proof? A limited number of men are already competing on women's college sports teams, and the NCAALGBT already has an NCAA Inclusion of Transgender Student-Athletes handbook.

Dr. Brian Hainline, the NCAA's chief medical officer, confirms that the association is poised to “really move in a positive direction.”

Summit participants are working to build additional consensus, but that's just a formality because no one in an official NCAA capacity is standing up against this insanity.

Ramifications? NCAA postseason sports sites will only be awarded to states with the LGBT seal of approval. You may also see some very masculine dudes on college women's basketball teams in the near future. As well as some token females on the benches of men's basketball teams at Duke, Villanova and other affirming academic institutions.

Idaho is one of the few states with the guts to stand up to the unholy alliance of the NCAALGBT juggernaut, but it may get shot down in the courts. The Boise judge who put the trans ban on hold said:

"... Because the Court finds Plaintiffs are likely to succeed in establishing the Act is unconstitutional as currently written, it must issue a preliminary injunction at this time pending trial on the merits. ..."

As if social justice activism hasn't ruined people's enjoyment of sports enough, it's just a matter of when college sports become more defined by the letters NCAALGBT than by biological gender and notions of fairness.