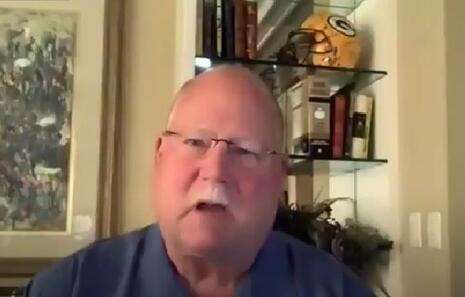 The USA Today sports section never misses an opportunity to bash President Donald Trump, and former Green Bay and Seattle Coach Mike Holmgren gave the newspaper another opportunity to do that Saturday. The retired coach appeared in a virtual Green Bay press conference to announce his support for Joe Biden and accuse Trump of malfeasance in his handling of the COVID-19 pandemic.

Holmgren (in photo) and Green Bay Mayor Eric Genrich, a Democrat, "both said Trump took a dishonest, disorganized approach to managing the virus that killed more than 190,000 people in the United States," according to the story written by Haley BeMiller of the Green Bay Press-Gazette and posted by USA Today's website.

The current number of deaths is actually 196,000-plus and a disproportionate 33,023 of them occurred in New York, where scandalous negligence took place on the part of Democrat Gov. Andrew Cuomo.

"Biden, they argue, has a more effective plan to curb the disease's spread and reopen economies hurting from business closures and now, fewer fans in NFL stadiums across the country."

Holmgren, who's in no position to question the leadership decisions of others, asked: "What has happened, how truthful has it been, how have our leaders right now done during this time of pandemic?"

This not-so-brilliant tactician blew the 1998 Super Bowl for Green Bay by ordering his defensive unit to surrender a game-losing touchdown to Denver so the Packers could get the ball back in the game's final moments. It was one of the greatest blunders in Super Bowl history.

Despite that horrendous mistake, Holmgren is in Green Bay's Hall of Fame because he won the 1997 Super Bowl and now gets ink for his presidential preference. He advised Wisconsin voters to cast their November ballots with a "decision based on what you believe has happened."

Holmgren said he identifies as a Democrat and he's planning to campaign for Biden throughout the swing state of Wisconsin. He blames the president for the Packers playing their games with no fans in attendance, saying, "The people own the football team, and yet the stadium’s going to be empty. It didn’t have to be this bad, I don’t think."

An empty Lambeau Field is also going to hurt the local economy, and that's on President Trump, Holmgren and Genrich said.

While President Trump is accused of incompetence with regard to the coronavirus in this story, Biden gets credit from BeMiller for visiting Jacob Blake's family in Kenosha last week. It was his first visit to the Badger State since 2018.

The story includes one paragraph countering the anti-Trump/pro-Biden narrative, a quote from Trump Victory spokeswoman Anna Kelly. She said, “Joe Biden proved during his 674 days of absence from Wisconsin that he doesn’t care about Badger State voters. No last-ditch effort will change that."