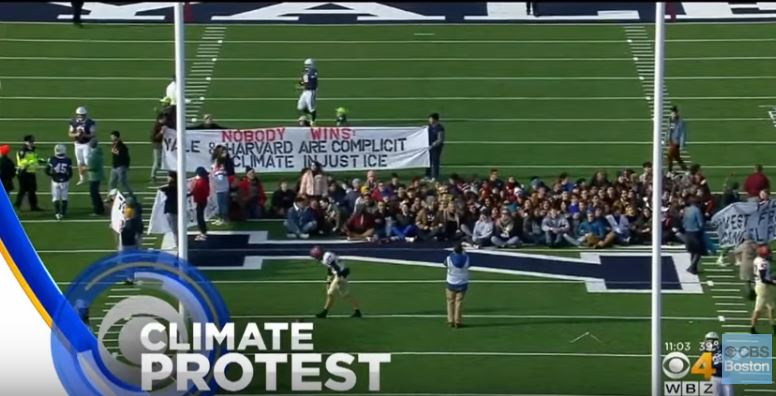 The intrusion of protest into sporting venues is becoming more frequent, and that was evident again Saturday when social justice protesters delayed the start of the second half of a football game between Yale and Harvard.

This year alone, two college football games have been marred by protest. As Americans shamed their country at the Pan American Games, anthem kneeling continues in the NFL and major league soccer is a forum for rabid political protest. Yet Saturday's debacle got thumbs up admiration from three members of Congress.

Harvard and Yale were delayed for more than an hour in attempting to start the second half of their football game in New Haven. NPR's Sam Gringlas reports:

"Unfurling banners with slogans like 'Nobody wins. Yale and Harvard are complicit in climate injustice,' protesters from both schools called on the universities to divest their multi-million dollar endowments from fossil fuels companies, as well as companies that hold Puerto Rican debt."

Some 150 students protested at midfield in the Yale Bowl stadium, clapping and chanting "disclose, divest and reinvest." Though the PA announcer and police demanded protesters clear the field, several hundred more fans came down out of the stands to join them. Gringlas reports several dozen people were issued misdemeanor summonses for disorderly conduct.

Harvard senior Caleb Schwartz, a protest organizer who was arrested, told NPR it took a football game to tell the two Ivy League rivals about the dire threat of global warming:

"We know that we don't have a lot of time to act to curb the effects of climate change, and the longer it takes for our universities to acknowledge their role in the climate crisis and accept responsibility, the longer the urgent action we need to take on climate change is going to be delayed."

Why this particular game for radical college students to act like children?

Because the Harvard-Yale football rivalry is 144 years old and the climate change kooks knew alumni from all over the world would be paying attention. So were Democrat presidential hopefuls Sens. Elizabeth Warren and Bernie Sanders. NPR posted their Tweets:

Rep. Alexandria Ocasio-Cortez (D-NY), co-author of the Green New Deal manifesto, retweeted a clip of Harvard football captain Wesley Ogsbury denouncing Yale and Harvard for investing in industries that are “destroying our futures.”

CNN's Nicole Chavez wrote a web story about the protest that was greatly overshadowed by Chad Myers' video calling for everyone to work together to combat global warming:

"Fighting climate change is going to take all of us. The goal is to slow down greenhouse gas output to allow the global temperatures to find a new equilibrium so that our grandchildren and great grandchildren can survive."