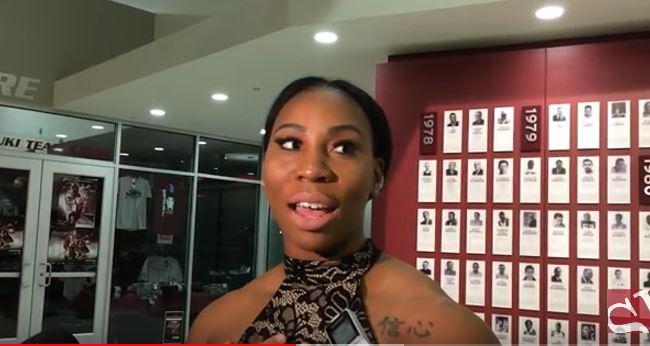 Casting aside interests in fair reporting this weekend, ESPN W's feature story on U.S. track and field star Gwen Berry attempts to justify her shameful protest at this summer's Pan American Games in Peru. Inspired by her war veteran father and the late Michael Brown of Ferguson fame, Berry won the hammer throw and raised her fist on the victory stand during the playing of the national anthem.

Ashley Scoby's story explains how Berry (seen in file photo) believes her protest notoriety will help her make a difference. The native of Ferguson was, along with U.S. fencer Race Imboden, placed on 12 months of probation by the U.S. Olympic and Paralympic Committee for their outrageous protest stunts in Peru.

Scoby writes that Berry "was called a traitor and a 'pathetic joke.'" But her father said, "For her to do that on the podium is more American than anything, if you ask me. ... Because that's what our country is founded on: freedom of expression, freedom of speech."

The ESPN story says Berry raised her fist not only as a protest of a system she sees as broken but also as a tribute to sacrifices -- both from her family and from past generations within her community. She only recently discovered this protesters' voice.

Berry's father Michael was a member of the Army Reserve who served in Iraq in 2004, inspiring her. "My dad fought for this country. ... My dad taught me a lot about this world and this life, especially about history and African history. He was always a rebel, always spoke up for himself, did what was right for himself and his family, and I feel like that's where I get some of my drive from. ...As a country, I'm sure a lot of people agree: We're not standing for what the American anthem represents, not at all."

Craving a "larger purpose" than her track and field career, the events of 2014 in Ferguson involving Brown and police officer Darren Wilson woke the social justice warrior in Berry.

Scoby's bare-bones version of what happened goes like this: "The circumstances of Michael Brown's death are well known by now: The black 18-year-old was walking home in Ferguson when a struggle ensued, and a white police officer shot him six times."

In Berry's version, she recalls walking the streets amidst protests and tension. "My heart was broken. Here is this young man -- another young man -- that's just killed, unarmed and killed. It made me question, 'Why is this becoming a thing?' Why are these men with guns so ready and willing to just kill a kid or anybody that's unarmed? It made me question a lot about the system here and why was it OK. Why was the police officer still getting paid?"

Key versions and the conclusions of the U.S. Department of Justice and a grand jury are nowhere to be found in Scoby's account of the thug who served as an inspiration to Berry. They concluded Officer Wilson acted in self defense while being assaulted by the 300-pound Brown, who had just robbed Ferguson Market and shoved a clerk.

Yet, "That weekend Berry spent in Ferguson lodged itself into her memory," Scoby's story goes. "It was one event that set her on a path of education that led her to the Pan American podium with her fist raised." The Peru protest occurred on the fifth anniversary of the Brown incident.

Then there's the problem Berry has with the Star-Spangled Banner itself:

"At the last part -- 'land of the free and home of the brave' -- something just came over me. It made me want to say, like, 'OK, this is a great country, this is a great land, but as Americans, are we really standing for what the anthem says?' And I don't think right now we are."