She would know because she's applying the heat. Spicer, a Rhode Island native, and disabled veteran Carlos Lopes each tossed a ceremonial first pitch before the Boston Red Sox minor league affiliate's game.

It's an insult, Ennis said, "in reference to the Trump administration’s record in relation to the LGBTQ community, as reported by the Washington Blade, Buzzfeed and The New York Times." De la Cretaz also tweeted it was "a terrible idea" to pick Spicer for the ceremony. Ennis also liked the tweet by Longreads sports columnist Britni de la Cretaz, who wrote, “What an insult to all their queer fans”: 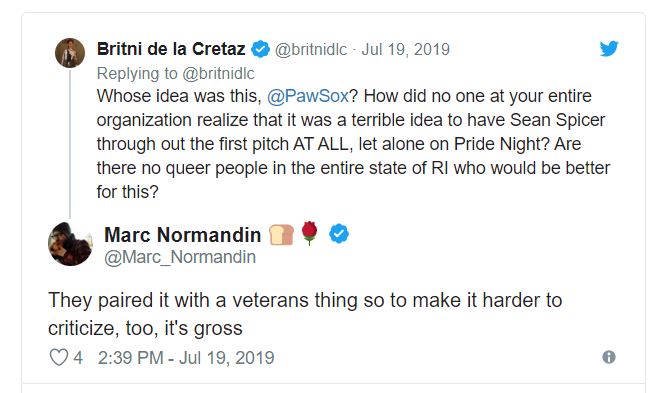 "Others called it 'tone-deaf,' 'a garbage move,' and asked why someone from the LGBTQ community wasn’t chosen for the honor," Ennis wrote. "Another criticized the PawSox for choosing to have a veteran join Spicer (see file photo of Spencer in his first White House press briefing in 2017)."

Outsports contacted the Pawtucket PawSox about LGBT displeasure with the choice of a former Trump man who spoiled their Pride Night. Ennis continued:

"A PawSox spokesperson told Outsports they won’t be issuing any official statement in response to online criticism that the team insulted LGBTQ fans by honoring Spicer and Lopes on the same night dedicated to celebrating the lesbian, gay, bisexual, transgender and queer community. The spokesperson said Pride Night at the Ballpark was scheduled far in advance and Friday happened to be the only night the veterans group was available. The team was very proud to have honored both LGBTQ fans and the Independence Fund, the spokesperson said."

Last month, the President tweeted a statement claiming his administration stands “in solidarity with the many LGBT people who live in dozens of countries worldwide that punish, imprison, or even execute individuals on the basis of their sexual orientation."

The New York Times reported then that Trump acknowledged this year's June pride month for the first time since he took office. In an official White House statement, the president said, “My Administration has launched a global campaign to decriminalize homosexuality and invites all nations to join us in this effort!” And, of course, one must recall that the President picked Richard Grenell (who's openly gay and has a longtime partner) for the important diplomatic role of Ambassador to Germany.