SF Chronicle: Kaepernick's Return To NFL Would Be Great Opportunity for Haters To Hate 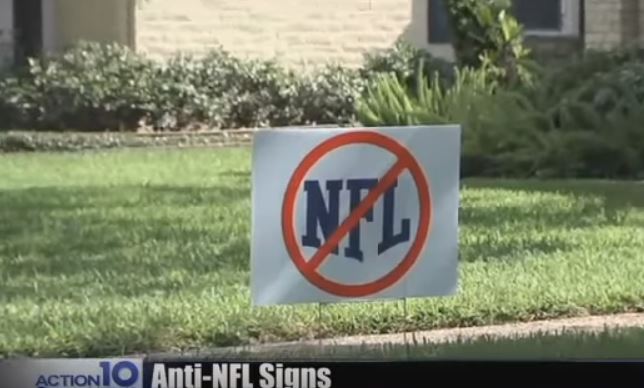 Virtually every time a starting NFL quarterback gets injured or traded, the Kaepernick eruptions begin anew with his adoring media pack. You can set your clock to it. The Dolphins traded long-time starting QB Ryan Tannehill to Tennessee a few days ago, and ... sure enough, Kaepernick-loving media start chirping about how Miami is the ideal place for the social justice warrior to make his grand re-entrance into the National Football League.

Only Kaepernick isn't the hater. It's the fans who disagreed with his disgusting behavior during the 2016 season when he first sat, then knelt during the pre-game playing of the national anthem. He's been an unwanted, unsigned free agent since then, as seen by NFL owners as too toxic for good business.

Scott Ostler, sports columnist for the San Francisco Chronicle, sure peddled some hate — and sarcasm, too — in a Saturday column about a possible Miami-Kaepernick connection:

"Kaepernick getting an NFL job would be great, even for his haters. If Kaepernick doesn’t pass for 7,000 yards next season and lead the Dolphins to a Super Bowl win, scoring the winning touchdown on a pass to himself, the haters could say, 'We told you he sucked.'”

With Kaepernick's compliant media cheerleaders, it's never a matter of disrespecting veterans and the flag, hurting the NFL's business (remember all the NFL's negatives from the 2017 season when the rebellion Kaepernick started torched TV and favorability ratings?). Precious few among the media care about those negatives! Ostler writes how great it would be if the notorious ex-quarterback is welcomed back into the league and how much his haters could hatefully hate on No. 7 some more:

"One thing we all agree on: It would be great if Kaepernick got a quarterback job, so the lovers could love and the haters could hate, and we could all move on to the next crisis, like how to stop the world from exploding in a fiery ball of hate."

"The Miami Dolphins traded away quarterback Ryan Tannehill and are in the market for a starter, either an experienced guy or a draft pick.

"This could be an opening for Colin Kaepernick."

It would provide an opening for Kaepernick all right. He would be playing again without being held accountable for his protests, which turned many a long-time fan away from the NFL. No apology. No mea culpa. Most likely more radical, Black Lives Matter-type activism, though.

Kaepernick's return would also be an opening for Ostler — to heap more hate on the president and the fans who detest the SJW.

Just put Kaepernick back in an NFL lineup and watch the media gush over him while more fans write off the NFL.