Jerry Thornton is a New England Patriots' beat writer for the Barstool Sports blog and claims to be a staunch defender of quarterback Tom Brady, Coach Bill Belichick and "all things Patriots." The blog has been accused of sexual harassment and misogyny, so it's not surprising that Thornton would excuse away the recent arrest of team owner Robert Kraft on the charge of soliciting sex. Thornton's fall guy is team chaplain Jack Easterby, who is reportedly leaving the team because of the owner's behavior.

Easterby (seen in photo) was New England's team chaplain and character coach for six seasons. His contract has expired and he's reportedly pursuing other ministry and career options. The Boston Globe calls Easterby one of Belichick's "closest confidantes," and credits him with helping "navigate the Patriots through significant highs and lows over six years — the Aaron Hernandez ordeal and Deflategate fiasco, plus four Super Bowl runs. Easterby had mentored the troubled receiver Josh Gordon." 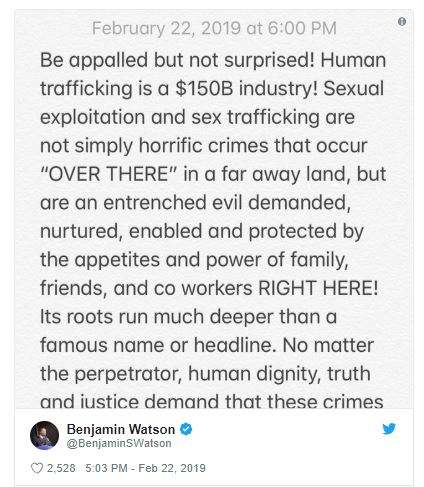 Thornton casually dismisses the charges against Kraft as "an 'aging, unmarried widower who ... may or may not have received hand pleasure from a consenting, 58-year-old professional sex worker who runs her own business." He bypassed the issue of trafficking.

The subject of most concern to Thornton is Easterby, whom he connects to all of the Patriots' well-publicized problems and scandals in recent years. That includes the murder conviction of former New England tight end Aaron Hernandez, who committed suicide in prison. It includes quarterback Tom Brady's suspension for deflating footballs during the 2015 AFC playoffs (aka Deflategate). It includes wide receiver Josh Gordon's multiple NFL suspension for violating the league's substance abuse policy.

Thornton puts down Easterby as a "Morality Coordinator" who dispensed "advice and Scripture instead of kale smoothies and Pliability." He writes that he'd love to admire the man for having the courage of his convictions, but instead discounts his efforts because Hernandez "went all Dexter in 2013. So that’s on his watch. And he gets about a C- on Josh Gordon. But I’m getting off topic."

Easterby cut and ran when a member of his "flock" he was shepherding through a wicked world went astray, Thornton charges:

"Doesn’t a man in Jack Easterby’s position have an obligation to try and save the soul of anyone in his ministry sins? Pardon me for going straight to the wristband cliche, but What Would Jesus Do? He befriended Mary Magdalene, a professional prostitute, and defended her against any who spoke ill of her because we are all sinners. Does Easterby think that if Mr. Kraft bought a Rub, a Tug and a Hug from her, Jesus would’ve just cleaned out his desk and went to work in some other town?"

As I stated above, Easterby's contract with the Patriots is up. There's no evidence to the claim that he is unforgiving toward Kraft, but it's the owner who will stand trial for allegedly breaking the law, not the team's chaplain.