Stephen King, Others Take Trump To Task For Caravan Tweet 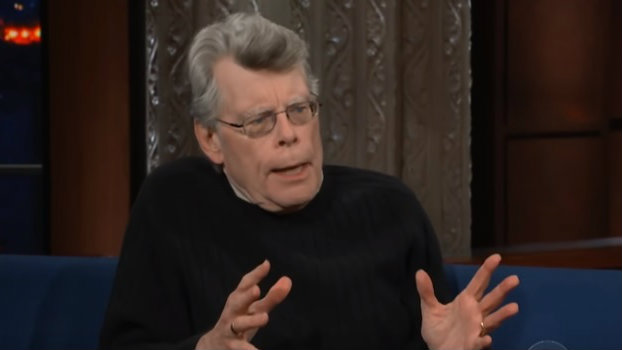 President Trump, while reminding the Twittersphere of the importance of secure borders, echoed the underlying logic of that verse in a recent Tweet concerning the migrant caravan that has been lumbering its way towards the United States from Central America. So far, the caravan’s size has confounded the Mexican military and its numbers may have swelled to 7,000 according to some estimates. Below is the tweet:

Full efforts are being made to stop the onslaught of illegal aliens from crossing our Souther Border. People have to apply for asylum in Mexico first, and if they fail to do that, the U.S. will turn them away. The courts are asking the U.S. to do things that are not doable!

Despite spelling out that asking for asylum was encouraged among the migrant mass and would not incur deportation, celebrities and the leftist blue-checkmarked entourage lined up to take the President to task for advocating safe migration techniques. Huffington Post reported on Oct. 22 that pen shark Stephen King was leading the charge, who likened Trump’s rhetoric to “act[ing] like the Red Chinese army was invading”:

Jesus, man--you act like the Red Chinese army was invading. They're just a bunch of scared and hungry people.

Nancy Sinatra, daughter of the late jazz crooner Frank and an ACLU supporter, chimed in as well, eager to remind Trump of recent court setbacks with regard to his immigration policy:

Our courts speak eloquently and truthfully.

The shortness of Sinatra’s slight is only matched by its obliviousness: The court case in question was due more to a technicality than an actual policy question.

The caravan could soon devolve from media circus to humanitarian crisis, with some officials warning that it could be co-opted by drug cartels in Mexico. Trump’s tweet, which treated the situation with due severity, should have been taken more seriously by the fame mob.