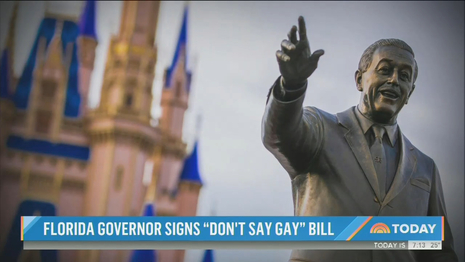 Child groomers the world over are convulsing in anger today, because finally, FINALLY Governor DeSantis (R-FL) has signed a bill that blocks public school students in Kindergarten through third grade from being exposed to gender identity curriculum and other LGBTQ lesson plans.

This infuriates the Walt Disney Company, which recently put out a statement condemning the bill being signed into law. So much for a family-friendly company. Stay mad Disney.

Titled the Parental Rights in Education Bill (or the “Don’t Say Gay Bill” if you’re a dishonest lefty), the piece of legislation stipulates that “classroom instruction by school personnel or third parties on sexual orientation or gender identity may not occur in kindergarten through grade 3.”

Of course even normal sex ed classes aren’t introduced to public school kids this young, so this bill isn't unusual. Though the left has smeared this as a horrific attempt to hide the reality of gay people from our youngsters.

Disney has been a vocal antagonist to the legislation (almost) every step of the way. Actually, CEO Bob Chapek initially decided not to play political football by condemning the bill. But his LGBTQ employees (there are seemingly millions of them) and the media made him feel so guilty about this abdication that he and the company have reversed and become the bill’s mortal enemy.

Despite Disney sending Chapek to meet with Governor DeSantis in person to persuade him against signing the bill, vowing to terminate political donations to Florida politicians who support it, promising to give to more LGBTQ groups, and speaking out against the pending law at every turn, DeSantis signed the bill on March 28.

In response, the company – which had also undergone a company-wide walkout protest orchestrated by its LGBTQ employees – put out a statement on Twitter after the governor signed the bill.

The company then gave its stated goal, that the law should be “repealed by the legislature or struck down in the courts” – surely an interesting goal for an entertainment company. The company also expressed that it remains “committed to supporting the national and state organizations working to achieve that.”

Of course the statement claimed that this is about protecting the “rights and safety of the LGBTQ+ community,” those at the company, in Florida and throughout the country.

But what about the poor five-year-olds who should not be exposed to these confusing, degenerate lesson plans? What about their right to not receive harmful sexual indoctrination?