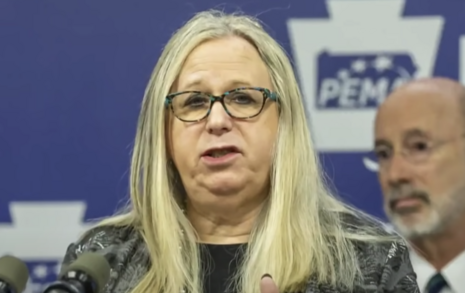 So we have another very serious, highly respected “Women of the Year” list given to us by USA TODAY and would you look at that? A biological man has been included among the roster of the influential and powerful women.

Oh wow. What an amazing, groundbreaking historical moment we have here!

The world’s first Assistant Health and Human Services Secretary to be considered a woman (even though he’s a biological man), Dr. Rachel Levine, now has the honor of being called one of USA TODAY’s Women of the Year.

So a man is now woman of the year? And damn right, it’s our duty as politically correct Americans to nod along while clapping vigorously for her achievement.

Suzanne Hackney wrote the outlet’s entry on Levine’s new honorable female status on March 13, stating, “Rachel Levine is one of USA TODAY’s Women of the Year, a recognition of women across the country who have made a significant impact.” Ok first of all. He’s not a woman, and secondly, how does Hackney feel knowing that she has helped the patriarchy insert a male into a “woman of the year” category?

Sounds like Hackney is not a supporter of the feminist cause, if we’re being frank.

So why has Levine been given such a great honor – besides the obvious woke PR implications? For USA TODAY, it’s because he held such a high office during the COVID-19 pandemic. The piece showed great reverence for his job, saying, “In normal times, her job is essential. During a pandemic, it's crucial.”

Oh yes, because when we all think of our government’s role during that drawn out debacle of a pandemic response, we think “crucial.” Vaccine mandates – totally “crucial” bro.

So yes, Levine is a transgender pandemic warrior who has had an extensive professional career “in medicine – as an academic, a clinical researcher, a primary care physician and as Pennsylvania's physical general and secretary of the Pennsylvania Department of Health.”

On top of that, he has great sympathy with the plight of women and girls (which is absolutely hilarious):

Levine said she is concerned about the challenges women and girls face related to body image. She ran an eating disorder program at Penn State University and was struck by the pressures of social media related to appearance.

Ah how nice. He’s so accomplished and empathetic isn’t he? Too bad Levine is missing the only real qualification one can have for being named “woman of the year.” He’s not a freaking woman – no matter how much of a looker he is with his long gray hair cascading down over his spiffy new female-styled HHS Naval uniform.

And USA TODAY, how do you feel about taking this spot away from a real biological woman? Does that feel like true equality to you? Or might it be that you’re actually taking away from the achievements of actual women?