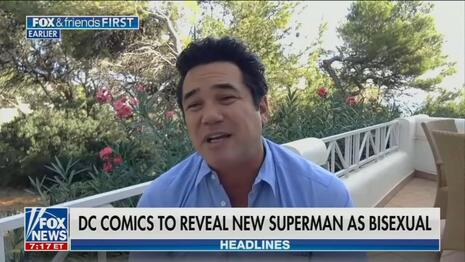 The new bisexual Superman, named Jon Kent, is actually the son of the original Superman, or Clark Kent's (Kal-El) son. The first issue involving the son of Superman showing off his bisexual preferences will hit store shelves on November 9 and is titled Superman: Son of Kal-El.

Of course, Cain, who played the comic book legend in the popular nineties TV show Lois & Clark: The New Adventures of Superman, was not impressed. In fact, he told the hosts of Fox News Channel’s Fox and Friends: First that this bisexual Superman is lame and most definitely not a “bold and new direction” for the character, as the media hailed the comic.

“They said it’s a bold new direction, I say they’re bandwagoning,” the 55-year-old actor and Hollywood conservative said on the FNC program.

Yeah, it’s bandwagoning. For the last several years, practically every piece of Hollywood or entertainment media has promoted a non-heterosexual theme. Even DC Comics has broken this ground before, announcing that their current rendition of Batman’s trusty sidekick Robin is bisexual as well.

Cain mentioned this, among other already watershed gay moments in the comic book world. “Robin just came out as bi — who’s really shocked about that one? The new Captain America is gay. My daughter in [The CW series] Supergirl, where I played the father, was gay.”

Yeah, come to think of it. This is an old hat.

“So I don’t think it’s bold or brave or some crazy new direction. If they had done this 20 years ago, perhaps that would be bold or brave,” Cain added.

Consider that we live during an entertainment era in which there’s a Hollywood gay lobby that demands that LGBTQ+ characters comprise 20 percent of all movie/TV characters. When LGBTQ people make up less than five percent of the population, there is clearly an overabundance of gay stuff in entertainment.

The actor then mentioned an idea or two that might make Son of Kal-El actually seem brave. “Brave would be having him fighting for the rights of gay people in Iran where they’ll throw you off a building for the offense of being gay,” he added. Though that would go against the media’s diversity rules, wouldn’t it? The lefty media is not allowed imply that Islam or any non-western culture is problematic.

“They’re talking about having him fight climate change and the deportation of refugees and he’s dating a hacktivist — whatever a hacktivist is,” Cain said. He then asked, “Why don’t they have him fight the injustices that created the refugees?”

“There’s real evil in this world today,” he continued. “Real corruption and government overreach, plenty of things to fight against. Human trafficking — real and actual slavery going on … It’d be great to tackle those issues,” the actor also stated. Though, those aren’t the sexy woke issues that promote the left’s degenerate agenda.

It’s this simple. Superman is an ideological tool now, not an actual hero anymore.