Hmmm, perhaps we have another secret Hollywood conservative on our hands, or someone who just follows common sense COVID procedure and has to be discreet about it. Recently, American Idol winner and pop/country megastar Carrie Underwood approved of conservative writer Matt Walsh’s speech decrying a Tennessee public school system’s mask mandates. 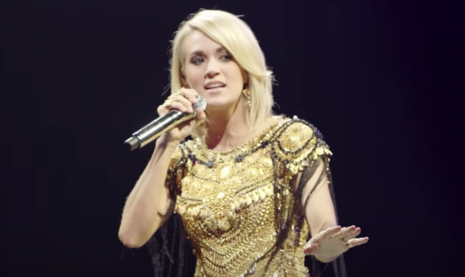 Walsh, a pundit at conservative outlet The Daily Wire, pointed out his interesting discovery on August 17, showing his followers that the music superstar liked his viral video. In it, he spoke to the Nashville school board and accused them of muzzling the community’s children like “rabid dogs” with their mask mandates.

The video, in which Walsh declared that the school board’s mandates were devoid of “evidence, data, science, common sense and basic human decency,” popped up as one of the most recent bits of content in Underwood’s “liked” category on her Twitter feed. Unless it was a fluke, Underwood, or whoever runs her social media accounts, seemed to think that Walsh’s anti-mask mandate speech made a lot of sense.

Carrie Underwood liked my video and now the mob is coming for her. She should know better than to like something that they don't like. This is an unforgivable sin. https://t.co/ksPEKrnCnT

Walsh retweeted former Lincoln Project member Keith Edwards’ screenshot of Underwood’s interesting Twitter activity, and captioned the post, saying, “Carrie Underwood liked my video and now the mob is coming for her.” Clearly, Edwards had posted the screenshot because he was furious that such a pop culture icon could skew so anti-progressive – at least on mask policy. In his own caption, Edwards wrote, “Not this …”

In another response to his screenshot, Edwards also wrote, “I’m honestly distraught,” and, of course, a bunch of lefties jumped in the comments section to express their disappointment. This ultimately proved Walsh’s point. Walsh’s post continued, saying, “She should know better than to like something that they don't like. This is an unforgivable sin.”

Considering how lefties treat people who stray from their approved narratives, Underwood may have to weather a wave of cancel culture coming for her. We’re sure she’ll survive it, considering how massive her audience is. She’s also a country star whose audience skews way more conservative than pop music fans.

Still, it seems like the backlash has only gotten started.

Walsh continued exposing the absurd nature of the cancel culture crowd with a subsequent tweet. In it, he feigned awe that the country music artist would do something so potentially detrimental to her mainstream appeal:

Like anyone else, I am upset and disturbed that Carrie Underwood liked one of my tweets. She should know better than to indirectly endorse the opinions of an extremist and scoundrel such as myself. Her lack of judgment is appalling. I demand that she renounce me and apologize.

Walsh added, “Her lack of judgment is appalling. I demand that she renounce me and apologize.” Yeah, if Carrie knew what was good for her, at least what the world considers good for her, she’d never EVER agree with a conservative, even if he had made the most obvious statement in the universe.