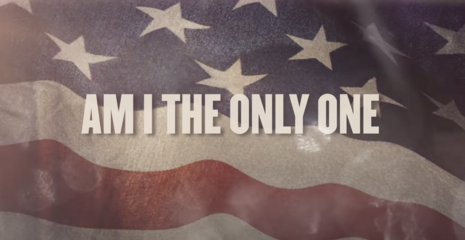 A new country song seems to be saying all the things patriotic Americans have been thinking over the past year as they’ve watched riots rage in their cities, statues of American heroes demolished, and professional athletes disrespecting the Stars and Stripes.

Country music artist Aaron Lewis released his new song, “Am I the Only One” on July 2, just in time for the Fourth of July weekend. Though if audiences were expecting a fun, straightforward tune about how good seeing the American flag makes Lewis feel, well, they got something different.

The new song is patriotic, though in a different, more raw, angrier way. It‘s about the confusion and grief Lewis feels as he sees the American flag get trampled on, the ideas represented by it spurned by new generations of Americans.

As the song opens, Lewis asks, “Am I the only one here tonight, shaking my head and thinking something ain’t right? Is it just me? Am I losing my mind? Am I standing on the edge of the end of time?”

Yeah, it’s obvious that the country star has something heavy on his mind.

Lewis continues, singing, “Am I the only one? Tell me I’m not, who thinks they’re taking all the good we got, and turnin’ it bad. Hell I’ll be damned. I think I’m turning into my old man.”

Though the chorus clears up the mystery of what Lewis is anguishing over, and it ends up being a theme all of us conservative, freedom-loving, flag-waving Americans have been dealing with as we look at the nightly news or scour Twitter. He sings, “Am I the only one willin’ to bleed, or take a bullet for being free? Screamin’ ‘what the f***?’ at my TV? … Are you telling me that I’m the only one, willin’ to fight for my love of the Red and White and Blue?”

Of course, by this point it’s pretty obvious what Lewis is singing about, and it’s the constant subversion of patriotism and love for American liberty that’s all too popular these days. Lewis’ lyrics hit directly in the same spot that was rubbed raw with outrage and terror as my friends and I watched our cities being torched, people being hurt, and statues being torn down for the sake of the Marxist Black Lives Matter lies. Those lies – and similar ones being taught to kids in schools today – say that America, as it was founded, is a place fit to be torn down.

Lewis’ lyrics hit the nail on the head as they describe the Red, White and Blue “burnin’ to the ground,” as well as statues of American historical figures being destroyed. He sings, “Another statue comin’ down in a town near you. Watching the threads of the Old Glory come undone.”

It's poignant imagery that refuses to sugarcoat what’s going on. This isn’t politics as usual for Lewis. He, like many of us, sees this all as a concerted effort to destroy the social fabric and freedoms Americans have loved and have died for. His lyrics also speak to him feeling like a crazy person because of all the media propaganda telling us this "change" is a good, noble thing.

He asks, “Am I the only one not brainwashed, makin’ my way through the land of the lost? Who still gives a s*** and worries about his kids, and they try to undo all the things he did?”

Having debuted less than a week ago, “Am I the Only One” already has over 1.7 million views between two different uploads of the song on Lewis’ YouTube page. It is currently trending at No. 13 for music-related YouTube content, too.

It’s safe to say that the artist isn’t the only one who feels this way.