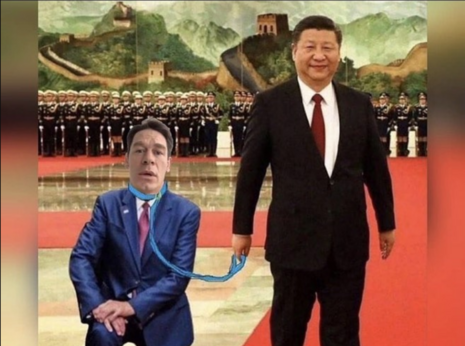 American professional wrestling star and Fast And Furious 9 actor John Cena recently got caught on Chinese social media apologizing to the Communist superpower after recognizing Taiwan as its own country. He claimed it was a “mistake.”

In a very uncanny video posted to China’s “Sina Weibo” social media platform, Cena was shown speaking fluid Mandarin to his audience in an attempt to apologize for the mistake of referring to Taiwan as its own country. In the South China Morning Post account of the video, Cena seemed to be groveling to the CCP, saying, “I’m very, very sorry about my mistake. I apologize, I apologize, I’m very sorry. You must understand that I really love, really respect China.”

Essentially Cena’s apology felt like his attempt to prevent himself from being cancelled over something politically incorrect from his past, but it took on a whole new strange and unnerving dimension considering he, a free American, was groveling to a foreign power which is attempting to assert authority over Taiwan, an independent, free market nation.

John Cena apologized in Chinese on Sina Weibo after calling Taiwan a country during an interview promoting Fast & Furious 9 pic.twitter.com/dzRKIYgEzL

And now what? Are we to expect an apology from Cena regarding him supporting dangerous Chinese foreign policy that denies Taiwan as a self-governing nation posted to American social media? After posting, the apology video did generate controversy here in the states. It seems as though Cena has found himself in an awkward predicament. He can’t believe both things at once. It seems we know where his allegiances lie.

The thoughtcrime Cena had to apologize to his Chinese overlords for was made in an interview promoting the latest Fast and Furious entry to a Taiwanese outlet, when he claimed that Taiwan would be the “first” country to be able to watch his new movie. Uh oh. That didn’t sit well with Beijing, which again, “opposes the suggestion Taiwan is an independent state.”

Thus, Cena had to prostrate before Beijing in the video which went viral on May 25. In addition to his pathetic and profuse apology (yes, China knows you love it so much, John), Cena tried to explain his flub, stating in Mandarin, “Hi China, I’m John Cena. I’m in the middle of Fast And Furious 9 promotions. I’m doing a lot of interviews. I made a mistake in one of my interviews.” Oh yeah, telling the Taiwanese reporter he’d be in the first “country” to see the movie was an accident. Sure.

Cena clearly fears biting the hand that feeds him. The South China Morning Post noted that Cena has been working towards helping his “wrestling promotion’s integration in China.” Yep. Perhaps Cena should stay over there. What’s he going to do next, say the Chinese Communist government has every right to enslave Uighurs?