‘Get Rid of It!’; ‘Old Town Road’ Singer Tells Fan to Terminate Pregnancy

The casual hatred for unborn babies in the womb is alive and well in our society. Recently, Grammy Award-winning rapper/musician Lil Nas X told a fan to “get rid” of their pregnancy on Instagram. After some pro-life folks took issue with his harsh words, Lil Nas X then went and mocked them.

Lil Nas X, the artist behind “Old Town Road,” the rap/country collaboration with '90s one-hit-wonder Billy Ray Cyrus that occupied the airwaves 2019, made a wicked joke about abortion over social media on December 15.

In an effort to engage his 6.3 million followers on Instagram, Nas prompted fans to ask him questions on any topic they wished. One such fan tried to be wacky and told the “Panini” singer via the Facebook-owned platform, “I think I’m pregnant.” The rapper replied with a “Congratulations!” but then, for comedic effect, instantly switched his tone, telling the fan, “Get rid of it!”

Of course, it was a disturbing joke to make, though one all too common in mainstream entertainment. When artists and actors can go on primetime awards shows and claim that having abortions is a necessary and important choice for women, why would a dark joke about killing unborn children be off limits?

Though pro-life non-profit Live Action decided to remind Lil Nas X and their Twitter followers why talking about killing unborn babies with impressionable fans is always a disgusting thing. “BREAKING: Rapper @LilNasX known for his song "Old Town Road" tells his pregnant fan to kill her baby— “Congratulations! get rid of it," the account reported.

The rapper however wasn’t keen on being scolded for what he thought was a cute joke. He actually responded to Live Action’s tweet, saying, “no one cares, ratio.” “Ratio,” meaning the rapper expected his mockery of the post to generate a higher number of hateful comments for the tweet than the number of “likes” the tweet received. It’s usually an indicator of poor reception for a particular post.

Still, Live Action hit back at the musician’s rude dismissal, tweeting, “Tens of millions of Americans DO CARE that 2,400 babies are being murdered every day.” The rapper hit back, insisting it was just a dumb joke he shared with a guy fan who was just goofing around: “the ‘pregnant fan’ was a boy on my instagram making a joke about him being pregnant u losers.”

But even Live Action founder Lila Rose blasted the rapper for his poor joke, saying, “Jokes about ordering women to have abortions and 'get rid' of their children are misogynistic and gross. Just say sorry and move on.” 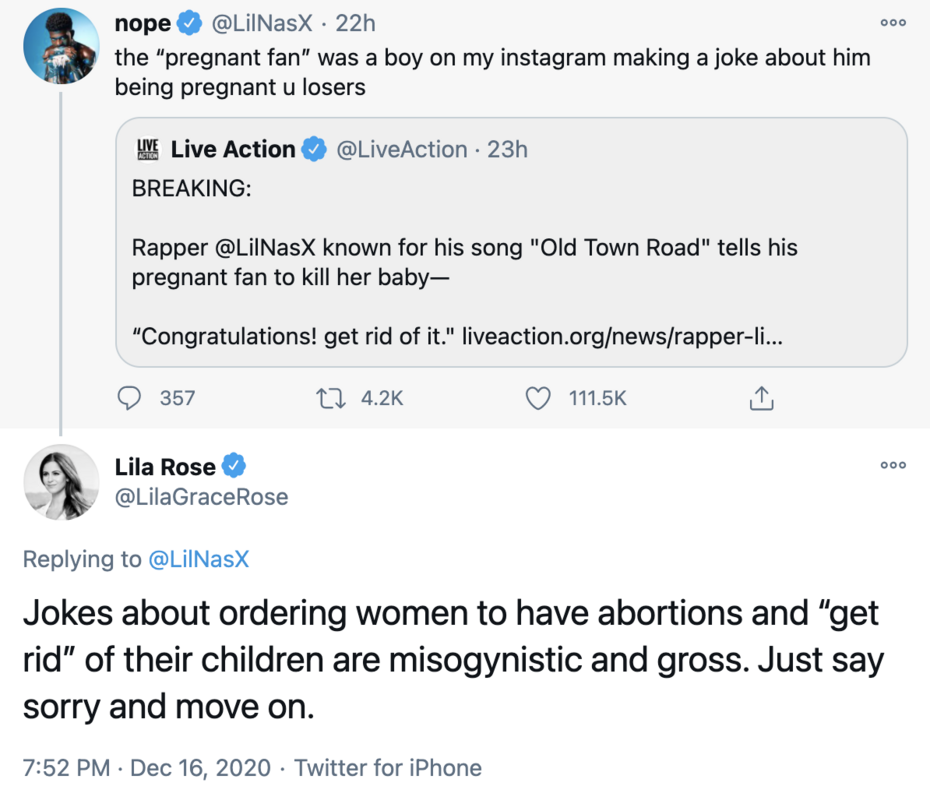 The rapper quit responding to Live Action after that rebuttal, but did go after a couple other conservative sites who reported on his extremely callous joke. He took a shot at Breitbart, writing, “ur musty and ratio.”

Nas did the same with conservative outlet The Daily Wire, commenting on their report of his joke, “no one cares and ur lying and ratio.” Though why is the rapper so adamant in defending his joke about killing innocent children? It’s such a bad look.