It’s clear Will and Grace star Debra Messing is one of the prominent Hollywood faces of Trump Derangement Syndrome, though her latest anti-Trump tweets have solidified her as the reigning champ of celebrity Donald Trump hatred. The actress endorsed violence towards the president in the form of prison rape, because it’s the proper retribution for his violent policies. 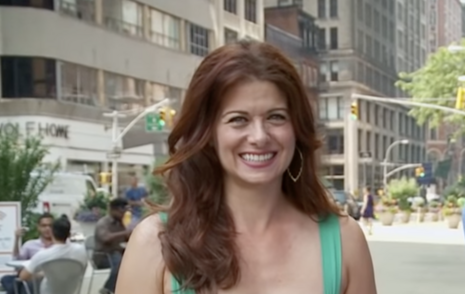 Yeah, the progressive and #MeToo supporter is justifying brutal prison rape now. But did you see in her that last season of Will and Grace? Oh, she’s such a doll.

It all started over the weekend when Messing made what could be arguably considered a homophobic joke at the expense of the president. In a not so subtle reference to nonconsensual homosexual prison relations, the actress tweeted that she hoped Trump would be a “popular boyfriend” among prison inmates. She wrote to the president“you are weak, scared, stupid, inept, negligent, vindictive, narcissistic, criminal,” she added. “I hope you live a long life in prison where you become the most popular boyfriend to all inmates.”

She might as well have told Trump not to drop the soap, while winking at him.

Though many users slammed Messing for the tweet, saying it’s a cruel joke which harms LGBTQ people. Ironic for a woman who considers herself a champion of LGBTQ rights. Obviously embarrassed, Messing deleted her tweet, but when she explained herself in a subsequent post she stepped in it even further.

According to Debbie, she didn’t intend to mock or belittle LGBTQ lifestyles with her joke, BUT she indicated that the hoping for Trump to be raped was still very much a part of her wishes. She defended it.

In another since-deleted tweet from December 14, Messing wrote, “Let me be clear: I said nothing about LGBTQ/queer love.” Well technically she resorted to gay sex as a punch line, which her LGBTQ comrades would not like on any occasion. Also shouldn’t feminists have a problem with rape as a punchline? But we digress.

Anyways, she continued, “Rape is an act of violence. Trump has perpetrated violence on hundreds of millions of people. My hope is (and this is the first time in my life) that the tables are turned and he is the victim of perpetrators.” Oh, so Messing desperately needs to appear woke and PC, but she’s totally fine looking like an evil psychopath? These leftists, man.

Of course, that garnered her even more backlash from critics and ordinary folks who draw the line at wishing a person to be raped. The Blaze’s Jessica O’Donnell even commented that Messing’s post might be the “most heinous thing I’ve seen on Twitter” and it’s not hard to disagree with that.

Messing then amended her comments even further, while not actually stepping away from wishing violence on the president. In the most recent update of her well-wishes to Trump, she wrote, “I'd like to say I have been an LGBTQIA ally for decades, and I was in no way referencing LGBTQI/queer love/sexuality. It is not my proudest moment, but 45 has victimized 100s of millions of ppl;  I had wished the tables turned on him.  I apologize for the offensive way I did it.”

Ok well, at least she’s sorry for the rape imagery, we guess. Still, it’s clear Messing will never give up the idea of getting violent revenge on the president. The last question is, though, according to her standard, what retribution should progressives get for their baby-killing policies? Just curious.