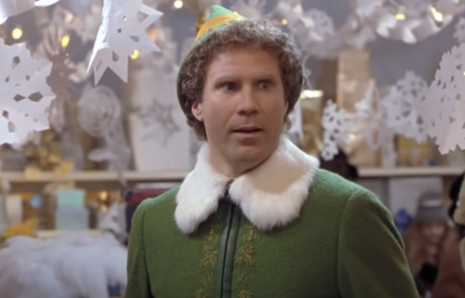 Great! So now your fond memories of Christmas movies will forever be associated with the far left’s quest to achieve open borders, unrestricted abortion, statehood for D.C. and Puerto Rico, and a stacked Supreme Court.

Comicbook.com reported on December 9 that Will Ferrell, Zooey Deschanel, and other members of the cast of the 2003 Christmas film Elf will come together for a virtual table reading from the film’s original script. The aim of the reunion is to raise money for the Georgia Democratic Party so they can beat Republican Senate candidates Loeffler and Perdue and secure a Democrat majority in the U.S. Senate.

Of course Ferrell and Deschanel will reprise their roles as Buddy the Elf and Jovie, the quirky mall employee in need of Christmas cheer. Deschanel mentioned her excitement about being able to do Elf again, saying, “If I were any more excited to be in the #ElfForGeorgia reunion I might explode into a burst of snowflakes.” Oh so cute.

Speaking of snowflakes, actors Edward Asner, Amy Sedaris, Andy Richter, Kyle Gass, and Matt Walsh will reprise their roles from the film as well. In addition several actors not involved in the original production will be part of the reunion, including The Office’s Ed Helms, John Lithgow, and Freak and Geeks actress and ardent abortion lover, Busy Phillips.

The event will be hosted by actress/comedian Ashley Nicole Black.

Elf’s director Jon Favreau will not be joining his castmates, though the outlet reported that another Jon Favreau, the leftwing podcast host and Bernie Bro behind “Pod Save America” will be “in on the fun.” Clearly this just points to this whole stunt being as entrenched in leftwing politics as possible.

The Georgia Democrats Twitter account announced that the virtual event with be held Sunday, December 13 at 4 PM Eastern Time. The link posted to their Twitter directed users to an ActBlue website with more information on the event as well as a way to donate to Georgia Dems.

ActBlue’s page stated, “Your donation to the Georgia Democratic Party supports their critical efforts to reach millions of voters and protect their right to vote for the January 5th Senate runoff.” The page then endorsed the two Dem candidates who will enable majority Dem rule in the United States government: “If Raphael Warnock and Jon Ossoff win, the Dems will flip the Senate! Join us to #ShowUpForGeorgia.”

Who could imagine that such an innocent bit of children’s entertainment could used to support such nefarious political purposes? Well there was PBS’ “Arthur” and “Sesame Street” shilling for Black Lives Matter, but this is about as bad.