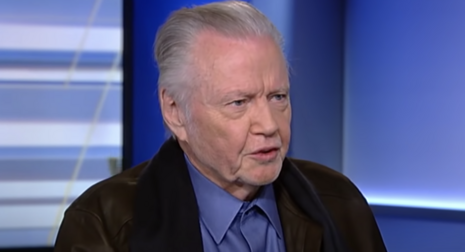 One Hollywood D-lister came out swinging against the Ray Donovan star and Presidential Medal of Freedom recipient, after his pro-America, pro-freedom and pro-Trump speech during the opening night of the Republican National Convention Monday. Voight’s co-star accused him of slapping him during a heated moment on the set of the Showtime show.

Frank Whaley, one of Voight’s co-stars on Ray Donovan, who is probably only recognized these days as the guy who was shot by Samuel L. Jackson while eating Big Kahuna Burger in Pulp Fiction, tweeted about the supposed abuse he received from the The Midnight Cowboy actor while on set.

Whaley tweeted, “Fuck Jon Voight. On Ray Donovan he slapped me across the face in the middle of a scene because he couldn’t keep up, then denied doing it.” The actor continued whining: “He forgot about the still photographer who was on set. Bottom line: Jon Voight is a major dick. #RNCConvention2020.”

Whaley’s post included a photo of the alleged moment, where Voight, who plays Mickey Donovan on the show, slapped Whaley, who plays FBI Agent Van Miller.

According to Newsweek, Voight has yet to comment on the incident. Though whatever issue Whaley had with the veteran actor, the timing of the accusation seemed like a pointed attempt at distracting from Voight’s conservative and pro-Trump views on display during his pre-recorded speech in support of Trump’s re-election bid.

During his RNC speech, Voight described Trump as “a man who cares, a man who loves America and all Americans.” The actor also made a point to temper the media hyperbole over Trump's handling of the Chinese Virus crisis. “While others criticized without solutions, President Trump's swift action saved lives, and as leading Democrats want to keep businesses closed down, our president is leading a way for a full economic recovery,” Voight added.

In addition to Whaley, the speech annoyed many others on the left, who derided the Deliverance star over social media. CNN pundit S.E. Cupp tweeted, “Jon Voight kicks off the RNC with, among other tall tales: ‘We chose a man who cares, a man who loves America, a man who loves all Americans.’ This would be a very good message if it weren't so easily refutable.” Blistering stuff, there. 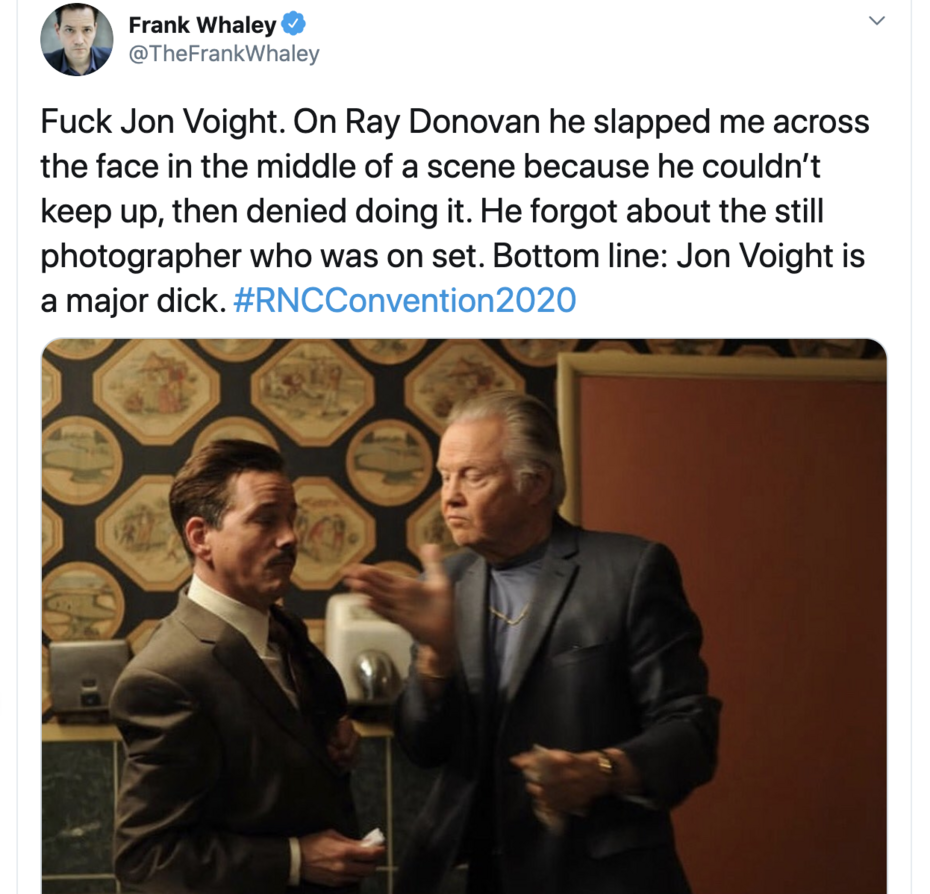 Daily Beast and MSNBC contributor Sam Stein felt gobsmacked at the fact that someone like Voight could have more airtime in a major party’s convention than far left maiden Alexandria Ocasio-Cortez. He tweeted, “I can’t believe they gave Jon Voight more time than AOC.” Newsflash. It’s just one of the many reasons last night’s RNC was a superior production to last week’s morose and boring DNC.

Much to the chagrin of many in the entertainment industry, Voight occasionally posts messages of hope and trust in God, American values and his praise for Donald Trump’s defense of those ideals to his Twitter page. He’s as brave as Hollywood conservatives come and Whaley’s going to have to come up with something better than that to get Mr. Voight to slow down.