‘Modern-Day Lynching:’ The 10 Worst Reactions to the Smollett Hate Hoax

In its eagerness to see demons on the other side of the aisle, the left has again stepped in another pile of Bigfoot scat -- this time over the quickly imploding story of the “hate crime” against Empire actor Jussie Smollett. And every bit of it is their own fault. 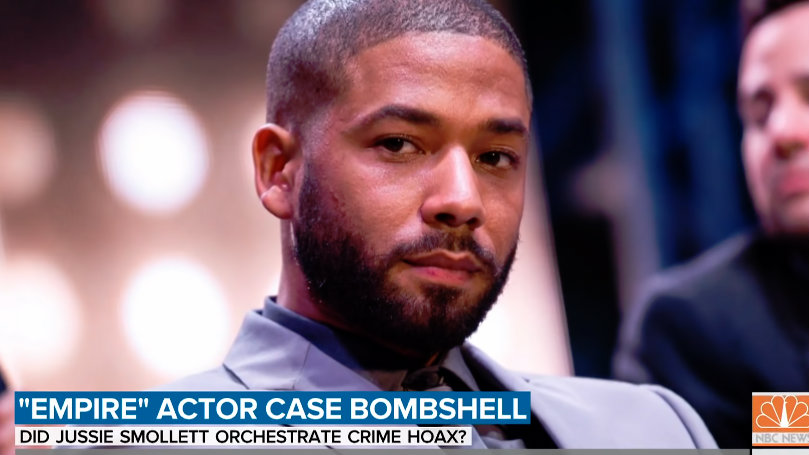 You have to want to believe that Trump-loving rednecks prowl the streets of Chicago in wee hours of arctic nights looking for black guys to attack with bleach and clothesline. You need to abandon logic to accept that said rednecks saw -- and recognized -- Smollett, that they beat him up for fewer than 6o seconds without causing him to drop his phone or his sandwich, that they put a noose around his neck and poured what must have been frozen bleach on him. Or that it was perfectly normal that he never took the noose off his neck or that …

Here are some of the worst reactions from progressive politicians, journalists and entertainers, both to the initial story and its subsequent exposure as a fraud.

1) GQ not only was sure Smollett had been attacked, it knew who’d done it and its earth-shaking significance for the future. The magazine hyped an article on the attack with a tweet asserting, “The racist, homophobic attack on Jussie Smollett is far-right America's endgame.”

2) Cory Booker fell for Smollett’s hoax hook, clothesline and sinker. “The vicious attack on actor Jussie Smollett was an attempted modern-day lynching. I'm glad he's safe.” Now that the story has fallen apart, Booker says he will keep his mouth shut until more details come out. Better late than never.

2.5) Kamala Harris loses points for reading from the same talking points as Booker: “This was an attempted modern day lynching. No one should have to fear for their life because of their sexuality or color of their skin. We must confront this hate.”

3) MSNBC analyst Zerlina Maxwell wasn’t satisfied at the speed with which her fellow lemming headed for the cliff, tweeting “The media is broken. If they can't call the attack on Jussie racist straight up then they need to find alternative employment. Apparent HATE CRIME? Sure bc that has a legal definition.” She then concluded with, “pouring bleach onBlack person while you are yelling about MAGA = RACIST.” 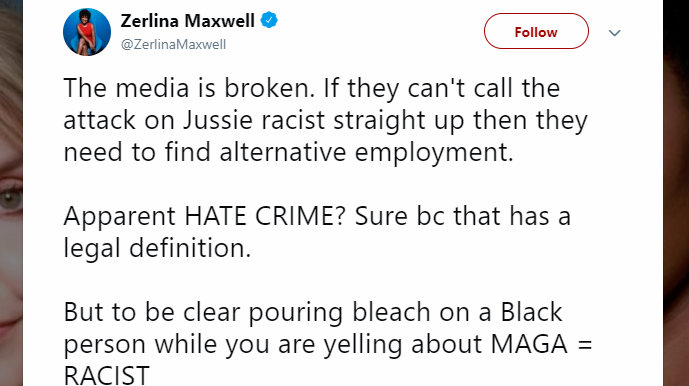 4) Confronted by the disintegrating hate story, Wrinkle in Time Director and VH1 Trailblazer recipient Ava DuVernay did the Twitter equivalent of sticking her fingers in her ears and shouting “I can’t hear you!”: “Despite the inconsistencies, I can’t blindly believe Chicago PD. The department that covered up shooting Laquan McDonald over a dozen times? That operated an off-site torture facility?” When someone pointed out that DuVernay was clinging too hard to the fake attack, she replied, “He might have lied. He might be not have. I don’t know. But what I do know? I never believe police on general principle just ‘cause they say so.”

5) Washington Post writer Eugene Scott Writing for the paper’s “The Fix,” section went right to the top to make some political hay: “To many, the Smollett incident — and the political nature of the assault — is yet another reminder for many black gay Americans that this president’s vision of a ‘great America’ does not appear to include them.”

6) CNN’s Don Lemon took the attack as a chance to educate us all on the hardship of being “black, gay, and famous.” Appearing on actress Jada Pinkett-Smith’s web show “Red Table Talk,” the anchor dismissed doubts about Smollett’s account, saying “When something happens to you and it’s controversial, everyone is coming for you, and so I knew everyone would be picking apart his story.”

7) Actress Viola Davis demanded that everyone get “personally” upset over the “attack.” She tweeted, “OMG!! THIS is why the LGBTQ community continue[s] to fight to be seen and PROTECTED against hate! We ALL have to take this racist and homophobic act of violence very personally!” When we see one, we will.

8) Democratic leader Nancy Pelosi also declared support for Smollett, tweeting out “the racist, homophobic attack on @JussieSmollett is an affront to our humanity. No one should be attacked for who they are or whom they love… May we all commit to ending this hate once and for all.” Pelosi, a little more self-aware than the other posters it seems, deleted the tweet shortly after more evidence surfaced.

9) One-time conservative earned her keep as a CNN talking head reminded harrumphed that supporters -- the people who’d been slimed and assumed guilty of a transparently bogus crime -- shouldn’t celebrate their vindication. “The giddiness among Trumpsters over the Smollett news is gross. This story is awful. He allegedly abused police resources, exploited raw divisions in this country, and made it harder for every victim of a hate crime to report. This is sad no matter your politics.”

10) Finally, what list of awful takes would be complete without CNN’s Brian Stelter, the Baghdad Bob of media analysts. On Saturday, he got a little snippy about having to explain away another media self-immolation. Some choice quotes: “And when you’re looking at those random websites all over the web spreading information, you can end up, I think, having – This story was able to be weaponized in many different ways.” C’mon Brian, the news media doesn’t maybe have a teensy bit to do with facilitating the hoax? “I think in retrospect, that Good Morning America interview which allowed him to tell his side of the story, that just made things worse for him. Perhaps the questioning was not tough enough on Good Morning America.” Now he tells us.