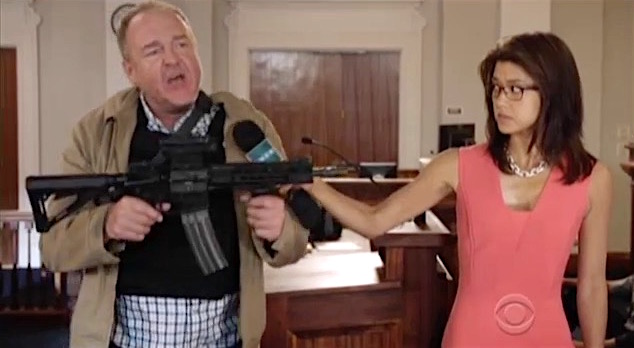 Kyle Kane is a deranged father who blames gun culture for the mass shooting perpetrated by his son, so he holds a room full of hostages at gunpoint to send a message. Left unstated: Kyle’s son obtained his firearm through a straw purchase, a process that is already illegal and carries a sentence of up to ten years in prison and a $250,000 fine for the purchase alone even if the illegally purchased firearm were never used in another crime.

As irrational as Kyle’s rant may be, at least he can claim ignorance. For Detective Danny Williams, there are no convenient excuses. As a law enforcement officer he should know better. Instead, he agrees with the murderer (Kyle had already murdered a social media star famous for his gun collection), explaining that, as a cop, he is also “outraged at how easy it is to get a gun, no questions asked.”

Danny: I know who you are. Kyle Kane, Virginia. Your son is Sean. I even know what your son did. Losing a son, uh, him being responsible for what he did, I-I can't imagine... I can't imagine what that did to you.

Kyle: There's not a day goes by I don't think about it. About where I went wrong. I should have seen the signs of... I failed my son. And because of that, now eight people are dead.

Danny: Look, you are not responsible. This is not on you, Kyle. You hear me? 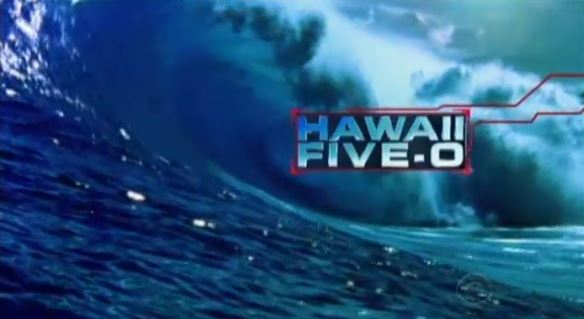 Danny: Listen to me. I am a parent. I got two kids-- I got a son and I got a daughter-- and I know... I know no matter what I do, how hard I try to raise them right, teach them the right things to do, at the end of the day, what they do, that I can't be responsible for their actions. I mean, what-what your son Sean did, he did on his own. There's nothing you could have done to stop that.

Kyle: You don't know that. I'm not the only one with blood on my hands-- the gunmakers, the lobbyists, politicians in their pockets-- they're all responsible, too. I thought after it happened that maybe something would change, maybe-maybe some good would come out of it. But then nothing happened! That's when I knew that something had to be done. Somebody had to hold these gun nuts accountable.

Danny: I understand that. And I know that it is very easy to blame the pro-gun crowd. But I-I think, ultimately, we are all responsible, collectively.

Danny: I agree with you 100%, okay? I am a cop. I am outraged at how easy it is to get a gun, no questions asked. As a father, I'm even more outraged. This is not the way we fix the problem. Uh, stealing guns and-and killing people? I mean, you're no different than any other crazy man with a gun. Right? Look, I don't think you want to hurt anybody else. That's not what you were trying to do. You were looking for a platform. You got it. You said what you had to say. But somebody in there is hurt, hurt pretty bad, and if he dies or if anybody else gets hurt, that's all people are gonna be talking about, okay? Not your message. Not your message. You want people to hear you? Come outside. Put your gun down and come outside. You want people to hear what you have to say, you got to put your gun down and come out. Kyle?

Detective Williams must only use his department-issued firearms; had he ever tried to purchase anything outside himself, he would have known what a ridiculous claim it was to suggest that a firearm could be obtained “no questions asked,” especially in Hawaii. The state of Hawaii already has the left’s coveted “universal background checks,” requiring a state-issued permit for all gun purchases. Yes, that includes private sales. As an island in the middle of the Pacific, the state has no neighbors with lax gun laws to scapegoat for its policy failures.

In addition to the episode’s frightening ignorance of state gun laws, “Ke Ku ‘Ana” also went out of its way to stereotype all gun owners. When the police realize the Kyle is targeting gun owners, they offer protection to notable dealers and collectors in the state. According Detective Williams, “Most of them said, ‘No thanks.’ Their attitude is our guns are all the protection we need.” I’m sure there may be some out there who have this attitude, but I don’t know a single gun owner who would turn down police assistance if they were informed of a threat against their life.

Finally, despite the reality that concealed handguns are frequently used for self-defense, the episode writes in a ridiculous scene meant to prove that even if someone armed were present, it would only escalate the situation. An armed judge pulls his own firearm while Kyle is distracted, and all but misses the deranged gunman. Instead of saving the day, he gets himself shot, nearly bleeds out on the courtroom floor and Kyle tells the hostage negotiators, "One of your judges just realized the answer to the gun problem sure ain't allowing more people to carry." Ironically, even though two officers are already in the room, neither of them takes the moment of chaos as an opportunity to tackle and subdue the shooter, instead they blow their cover to attend to the judge.

When writing shows about firearms, Hollywood should spend less time breathing life into anti-gun fantasies, and more time studying the actual laws in place (especially when your show takes place on an island with gun laws so strict they were ruled effectively unconstitutional). With a little research, they could avoid future embarrassment.