Knife-Wielding 'BrainDead' Liberal: Keep Your Hands Off My NPR 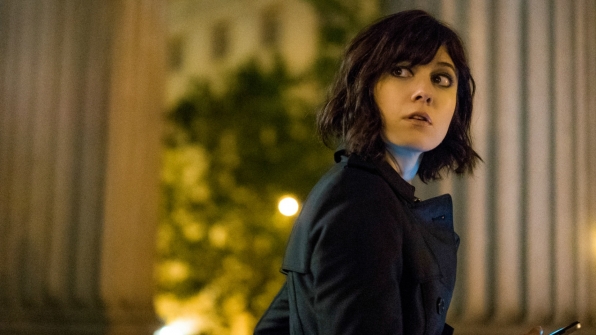 "Wake Up Grassroots," last night’s episode of CBS’s political comedy, BrainDead, once again demonstrated that the writers aren’t afraid to mock activists from both sides of the aisle. Terrified that a compromise deal might eliminate the National Endowment for the Arts and cut off his IV drip of government media, a knife-wielding liberal constituent cornered Democratic U.S. Senate staffer Laurel Healy (Mary Elizabeth Winstead) to demand more funding for PBS and NPR programming. He was, apparently, unaware that those entities are primarily funded by the Corporation for Public Broadcasting, not the NEA. Sure, it's still tax dollars, but it's a separate pot that would not have been affected by the fictional compromise.

Constituent: Hey, why aren't you helping me?

Laurel: Oh, come on. You want something, you come to my work. You don't follow me here.

Laurel: Sir, this is a work matter. This is not some...

Laurel: It's a rape button. Sends a GPS signal to the police.

Constituent: What are you, insane? This isn't a rape. I'm a member of Men Against Rape.

Laurel: You're carrying a knife!

Constituent: It's from The Splendid Table! Don't you want to know whether Reverend Chambers solves the murder?

Laurel: I don't know what you're talking about.

Constituent: Grantchester, Masterpiece Theater! Don't you want to know?! If we lose the NEA, we won't!

Constituent: We are angry and we will not be denied.

Constituent: Oh, you know what you are?

Laurel: I know who I am, and I don't give a damn what you think I am.

The alien-bug-infested constituent’s ignorance aside, it’s still funny to see a mainstream show depicting a liberal hounding his senator’s aides to demand more of other people’s money. Unfortunately, BrainDead’s parody took a darker turn later in the episode. Whereas the liberal character was depicted as ultimately harmless, even if his antics frightened Laurel, the show’s Tea Party analogues were chomping at the bit to kill Democrats with bombs.

Jules: We bought a domain name, and we'll be up and running in a few hours.

Gareth: Great. And you'll lay out the One Way philosophy there?

Tom: Do you want to see it?

Gareth: No, the less we coordinate the better. What else?

Jules: We'll have columns, blogs, comments and various instructive links to bomb manufacturing or how to alter bullets for better expansion. But also there will be a sign-up sheet for further actions.

Jules: We'll have a sign-up sheet for further actions.

Gareth: No, no, uh, before that, you said something about links?

Jules: Yes. On the Web site, to bomb-making materials. It's stuff you can find online now, but it's good to resource it all in one place.

Gareth: Why do you need links to bomb-making materials?

Jules: For the people who don't know how to make them. It's all legal.

Gareth: Why do we...need bombs?

Jules: To defend our country.

Gareth: Yeah, but you can't kill them.

Jules: What do you mean?

Gareth: I mean you can't kill them.

Jules: How do we stop them, then? It's another revolution. Red said so.

Gareth: Yeah, but he didn't say, "Pick up a musket and fight."

Jules: Right, because we have Glocks.

Gareth: You can't do this. Seriously, guys.

Jules: With all due respect, you said we can't coordinate.

Laurel: Are you serious with this crap?

Laurel: You leave this with me, and then you run away like a little baby.

I guess the writers at CBS are unaware Occupy Wall Street members, not Tea Partiers, attempted to blow up a bridge in Cleveland. The plot was foiled by an informant who secretly recorded the gang’s meetings and relayed their plans to the FBI.

It’s nice to see the writers of BrainDead making an effort to mock both sides of the aisle in Washington, but the show needs to work on being far more even-handed. It’s not really “mocking both sides” if the show continues to depict liberals as merely driven crazy while portraying conservatives as soon-to-be murderers.