ABC Drama Taps ‘The View’ to Preach about Homosexual Oppression

After four seasons, ABC’s country music drama Nashville seems to have found only one coherent theme: country music fans are violent homophobes. On the flipside, “It’s Sure Gonna Hurt” was an apropos title for an episode that shamelessly pounded messaging instead of focusing on good storytelling.

The episode opens with Luke Wheeler’s (Will Chase) appearance on ABC’s The View. Luke is immediately asked about his recent, on-air spat with “conservative” pundit, Cynthia Davis (Mandy June Turpin).

Whoopi Goldberg: He's a red-hot country artist who just became one of the hottest topics in the headlines, so you knew we had to make some room for him at the table. Please welcome Luke Wheeler. Hey, Luke! 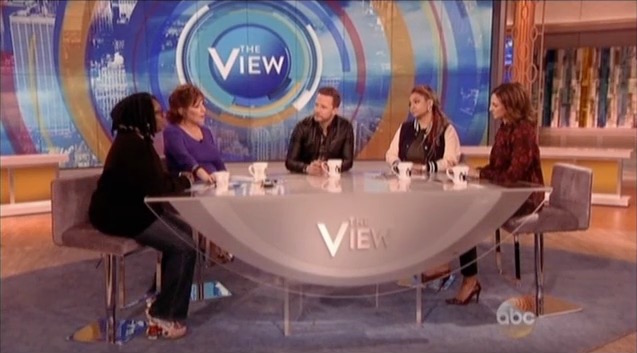 Luke: Thanks for having me. Thank You.

Whoopi Goldberg: So, you're a hot topic right now for your very heated and very public battle with conservative pundit Cynthia Davis. How'd this all start?

Luke: Well, I wanted to get my artist Will Lexington's music on the radio...

Luke: Uh, but we ran into some resistance because of his sexual orientation. So I made a public plea to have his song requested, and Cynthia took offense.

Paula Faris: And she says that you were shaming people into feeling like a bigot.

Luke: Well, um, Cynthia says a lot of things, a lot of which aren't true, but the truth is that Will is an amazing artist, and the conversation should be about his music.

Joy Behar: Well, but regardless what the conversation should be, the fact remains that it's not about the music, really. I mean, you've shined a light on a very important social issue. So what's your stance on that?

Luke: Well, I believe that any discrimination -- whether it be race, religion, or sexual orientation -- is just plain wrong.

Raven Symone: I couldn't agree more, but here's where I'm still confused. I mean, you're the forerunner leading this charge. Where's Lexington in all this?

Luke: Well, uh, Will's gone through a little personal tragedy. He just lost his mom, so...

Paula Faris: But he was refusing to comment even before that, right? I think the problem that a lot of people have is, why does it seem like you care more than him?

Luke: Well, I don't know if it does seem like that, but I can assure you that Will cares.

At least Luke better hope he cares, because while Luke is defending Will’s artistic integrity, his own son, Colt (Keean Johnson), is beaten to the point of hospitalization by a gang of angry military homophobes at Fort Benning. At least Luke can reunite with his estranged son when he comes to. The two had parted ways after Luke pressured his son into silence about the true cause of label CEO Jeff Fordham’s (Oliver Hudson) death earlier this season. (It also turns out that Colt threw the first punch defending his father from the homophobes who beat him to a pulp).

Then, just to further prove their point, they cut to a clip of Fox News stand-in Cynthia Davis’ show where she excoriates Luke for his “proselytizing of the homosexual agenda.”

Colt: Dad, what are you doing here?

Grandfather: W-we know what went on. You just say the word, and I'll get your father out of here.

Grandfather: Why don't we let Colt decide that?

Luke: I'm so sorry, Colt. I'd never want to be the one responsible for you being in pain.

Colt: It's not your fault.

Grandfather: Sure it is. If it wasn't for him –

Colt: No, I threw the first punch.

Luke: Why would you do that?

Colt: I was defending you.

Luke: Son, you shouldn't have –

Cynthia Davis: Well, guess who finally decided to emerge from his hiding place and speak out to the media today. Will Lexington. But was it to comment on Luke Wheeler's proselytizing of the homosexual agenda? Nope. It was simply a lame excuse to promote his new album. Bad enough he rubs our noses in his morally depraved behavior, but to not have the guts to defend himself? It's an embarrassment. He and the rest of his so-called community should do this country a favor and just disappear.

While Nashville’s writers are busy virtue signaling to the Hollywood left and setting up the inevitable showdown in which Will Lexington will undoubtedly humiliate Cynthia Davis in the next episode, nobody on the show’s production team stopped to consider the irony of Elton John’s cameo.

In a parallel story arc, The Exes’ Gunnar Scott (Sam Palladio) jumps at the chance to appear onstage with his idol. If country fans are as hateful as Nashville wants you to believe, why on earth would any artist even consider appearing on stage with a gay-married, pop-rock icon who once declared that Christ Himself would support same-sex unions? Scott’s career would be over before he finished the first chorus, and his band partner Scarlett (Clare Bowen) would be the one launching a solo career.

I should know better than to expect any consistency from Nashville. As I wrote in the opening, “It’s Sure Gonna Hurt” was about shamelessly pounded messaging instead of focusing on good storytelling.