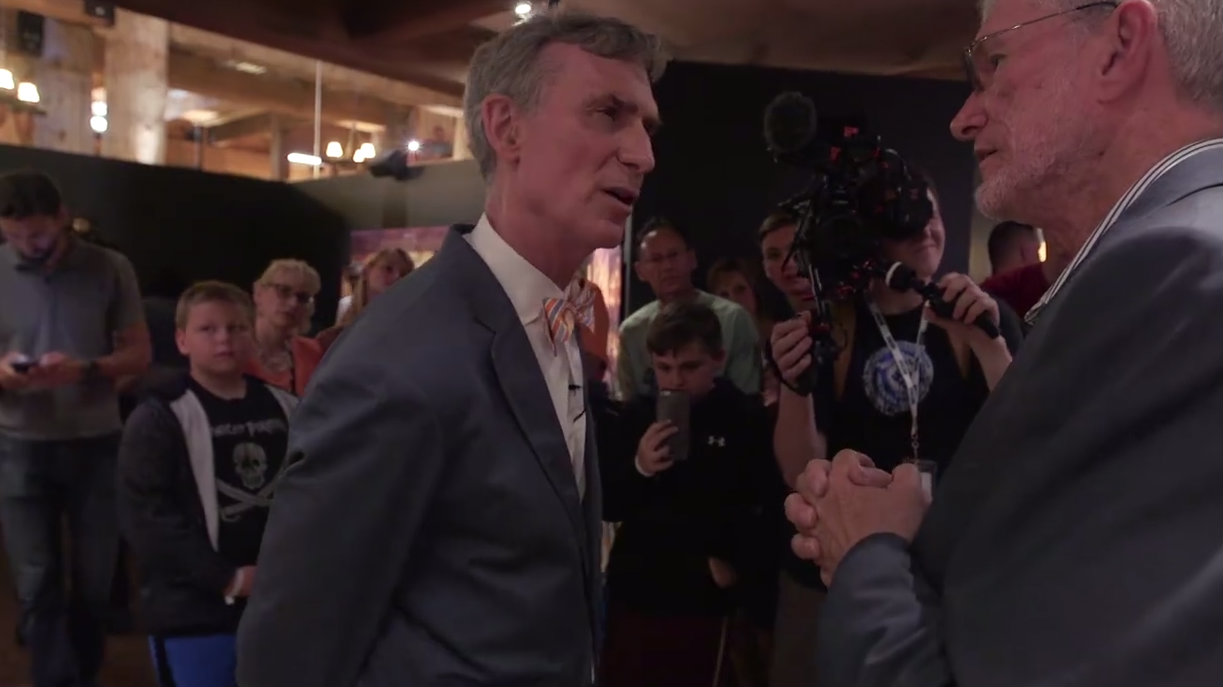 Nye and Ham awkwardly crossed blades over a variety of topics – from the “moral” justification for wearing clothes to the basis of right and wrong – as they slowly made their way through the scripturally proportioned Noah’s Ark replica.

Throughout the dual of sound bites, Nye repeatedly turned towards the gaggle of phone-wielding late elementary- and middle-school children that stalked him to teach them what “people in the scientific community” profess.

“Here’s another thing we [Ham and Nye] disagree about, everybody,” Nye said after being accused by Ham of not having a “moral” basis for wearing clothes. “People in the scientific community claim that what we feel is a result of evolution,” said Nye according his usual fashion of speaking for the entire scientific community on extra-scientific matters.

Morality, he explained, “is not a result of a top down issuance of laws. That’s the claim in science.”

These comments prompted Ham to reposition himself in front of Nye, a median between the atheist and the fifth graders, whose glazed stares betrayed the fact that they had no idea what is going on. After explaining the eschatological significance of clothing, Ham personally offered Nye salvation.

Nye almost succeeded in showing self-restraint nodding and thanking Ham for the personal invitation to paradise, but the thought of the poor children being “indoctrinated” by this devilry was too much for Nye. Again climbing to his imaginary pulpit, Nye rebutted, “I’m very skeptical that sin caused us to wear clothes.”

He then asked Ham, “You were not born again were you? You just started with this right?” apparently thinking that Christians who are raised Christian can’t be born again.

After Ham explained to Nye the theology of being “born again,” Nye responded, “I would prefer that you weren’t indoctrinating young people with anti-science.”

Later, Ham prayed out loud for Nye. Moves and countermoves. Nye in response launched “hopes” at Ham and the assemblage of followers. “Here’s hoping you all learn about the process of science, the best idea humans have ever had,” he said, mustering his pastoral zeal.

Ham and Nye’s competitive preaching reached another climax when Ham asked Nye how he determines right from wrong. Nye explained that there are two factors in determining right and wrong, “feelings” and whatever rules the community agrees upon.

When Ham asked whether two people could have “different” moralities in light of this “subjective” ethics, the ever-true scientist could only respond probabilistically:

Nye used to be just the "science guy," the quirky star of elementary school science videos for lazy teachers. He's since taken a hard turn toward the political—putting victory over climate change on par with victory in WWII, saying the Jews in Europe could solve rising anti-Semitism if they just would “get to know” their “neighbors,” and embarking dangerously outside of his expertise on matters of philosophy and theology.

Last month, CBS gave voice to unnamed "critics" saying the ark was "not scientifically based" and "promoting an ignorant view."