Salon: Margaret Sanger Is 'Our Lady of Birth Control,' #WithHer 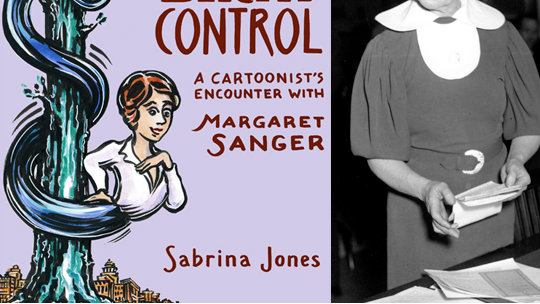 Graphic novelist Sabrina Jones has just finished her latest work, “Our Lady of Birth Control,” which attempts to “humanize” the feminist icon, Margaret Sanger. Accordingly, Salon had to write a glowing review and interview the author.

“Sanger’s own legacy is complicated,” Salon author, Kim Kelly wrote. It’s “too, fraught with accusations of racism and a perceived championing of eugenics.”

Accusations and perceptions? According to Sanger, birth control is “nothing more or less than the facilitation of the process of weeding out the unfit race” in order to produce a “cleaner” one. Sanger explicitly aimed at “racial progress” by which mothers would only pass down those characteristics that made for “strong individuals and, collectively, a strong race.”

According to Kelly, however, we can’t try to understand Sanger’s “perceived” legacy of eugenics and racism through our mistaken “21st century prism.” Everyone back then was doing it, Kelly excused. (Try telling a liberal she shouldn’t look through a “21st century prism” at, say, opponents of women’ suffrage or, for that matter, the Founding Fathers.) Plus, obviously a “sexually liberated woman,” like Sanger, “would rack up bad press.”

Kelly’s apologetics for Sanger were a warm up for Jones’s upcoming apologetics in the interview however. In the interview, Jones joked, “Google ‘Margaret Sanger and race,’ and brace yourself for a horror show of racism, genocide, the KKK and Hitler.”

“Almost none of it is true,” she said. According Jones, Sanger simply “fought so all women, especially those with low incomes, would have the knowledge and ability to make their own decisions about bearing children.”

Of course, that is precisely what social Darwinists wanted in order to clean the favored race from the unsuccessful sorts who have “low incomes.”

But as Jones would have it, Sanger only used eugenics in order to appeal “to people across the political spectrum.” At the heart of it, she just wanted “fewer, healthier babies, and reduced poverty.” Jones would have done well to elaborate on what Sanger meant by “healthier.”

Jones went after Teddy Roosevelt for opposing Sanger, explaining that Roosevelt was afraid that birth control would get into the hands of “‘native born’ Americans,” who would subsequently not pass on their superior stock.

Ultimately, Kelly recommended Jones’ book for “anyone with even a passing interest in the women’s rights movement – especially if your #WithHer [with Hillary Clinton].”

Salon is not the first to praise Margaret Sanger despite her progressive ideology. This year, Sanger’s organization Planned Parenthood awarded 13 journalists at its 100th anniversary gala. Last year, CBS promoted the idea of replacing racist President Andrew Jackson with Sanger on the 20 dollar bill.