In the wake of the Louisiana, Minnesota, and Dallas shootings, Katie Couric had a lot to report about police violence, but nothing to say about the protesters’ violence in Minnesota.

In a video published Monday, Yahoo! News anchor Katie Couric interviewed Black Lives Matter (BLM) leader DeRay Mckesson about this weekend’s protests in Baton Rouge against the recent shootings. Although she repeatedly reported the number of protestors arrested and allowed Mckesson to drone on about police violence, Couric neither asked Mckesson about the violence of the St. Paul protesters, nor reported the 21 law enforcement officers injured there. 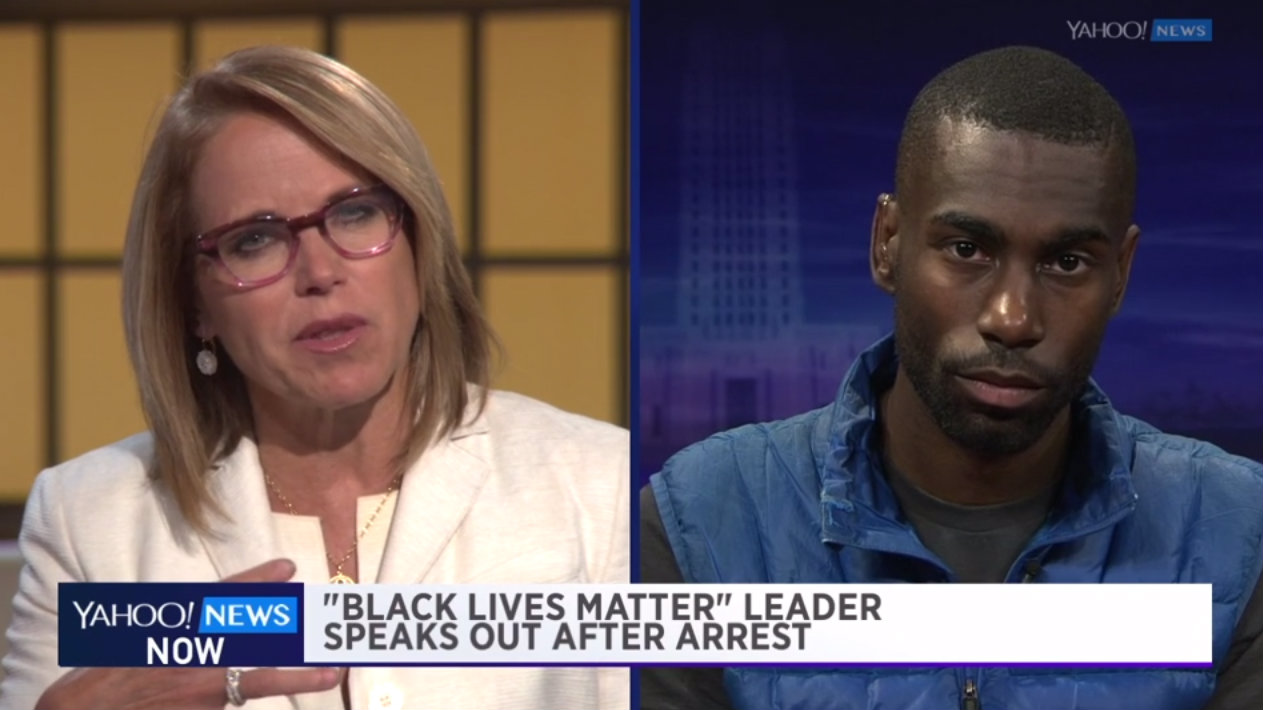 “There were over 200 arrests made at protests in Baton Rouge, Louisiana and St. Paul, Minnesota on Saturday where earlier in the week two African American men were shot and killed by police within two days,” Couric began.

“Can you set the scene of the protest for us?” she asked Mckesson about Baton Rouge.

“It was truly an example of peaceful protests,” Mckesson urged. He then bashed the violence from police:

“And what we saw was the police turn the corner and there were about 200 officers who forced the protesters away from the barricade and then began to engage in snatch and grab. Just assaulting protestors. And when I think about what I’ve seen here in Baton Rouge, is that I’ve seen protestors engaged in peaceful civil disobedience and peaceful protests, I’ve only seen violent police. And we have to live in a world where the police don’t kill people.”

Couric responded to Mckesson’s description by nudging him to answer to the police accusation that he and the protestors were arrested for blocking traffic.

“The people who brought the conflict were the police,” Mckesson insisted in an artful non-answer.

Couric added to his response, repeating, “In fact, I think, more than a hundred were arrested.”

Couric asked Mckesson about the Dallas police shooting, but never inquired about the violence towards police in Minnesota where they were attacked with rocks, bottles and fireworks. One even “suffered a broken vertebra after a concrete block was dropped on his head.”

As St. Paul Mayor Chris Coleman explained to MSNBC, the shooting of Philando Castile didn’t take place in St. Paul, but in a nearby city. St. Paul’s police department, he said, is actually a model of community-friendly policing.

“Yeah, you know what? I stand corrected; probably ‘inciting’ is the wrong word,” she said. “I guess maybe ‘leading to’ or ‘having a response—a violent response to’ drawing attention to this issue [police violence].”

Couric boasts a history of leftist reporting. Earlier this year, she was caught releasing an interview with gun rights supporters, which was edited to make them look stupid.