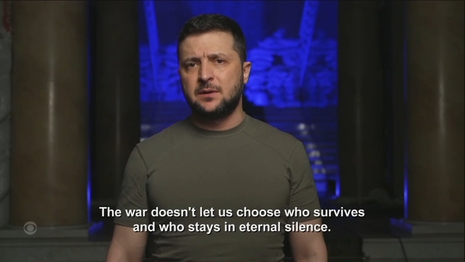 Sunday's 64th Annual Grammy Awards on CBS focused mostly on music instead of politics, with the notable exception of a surprise appearance via video from the president of the Ukraine.

Last year's Grammy awards show was marred by Black Lives Matter (BLM) propaganda and an inappropriate hypersexualized performance of the song WAP (Wet A** P**sy) by Cardi B. and Megan Thee Stallion.

"Kicking off tonight from inside M.G.M. Grand Garden Arena is a dynamic duo who are singlehandedly bringing back the '70s, which might explain all the inflation," Noah said while introducing the R&B duo Silk Sonic.

His intro also made a reference to the now-infamous Will Smith slap at the Oscars last week.

Unlike last week's trio of Oscar hosts, Noah didn't use the opening to attack Florida's new anti-grooming law. His one reference to an LGBTQUIA agenda only came when he introduced homosexual rapper Lil Nas X, whose video for the song "Call Me By Your Name" includes the rapper engaging in a gay lap dance with the devil.

"He raps, he sings, he breaks records, he definitely upsets the hell out of your homophobic uncle," Noah announced.

Hollywood can't get through an awards show without taking at least one swipe at "deplorables." Anyone who isn't cool with Satan-loving, homosexual lap dances by a rapper who made appearances with Sesame Street's Elmo is just "homophobic."

The mid-point of the show took a moment to focus on the war in Ukraine and included a speech via video by Ukrainian president Volodymyr Zelensky.

The War. What is more opposite to music? The silence of ruined cities and killed people... Our children draw swooping rockets, not shooting stars. Over 400 children have been injured and 153 children died. And we'll never see them drawing. Our parents are happy to wake up in the morning in bomb shelters but alive. Our loved ones don't know if we will be together again. The war doesn't let us choose who survives and who stays in eternal silence. Our musicians wear body armor instead of tuxedos. They sing to the wounded. In hospitals. Even to those who can't hear them. But the music will break through anyway. We defend our freedom. To Live. To Love. To Sound.

On our land we are fighting Russia, which brings horrible silence with its bombs. The dead silence. Fill the silence with your music. Fill it today. To tell our story. Tell the truth about this war on your social networks, on TV.

Support us in any way you can. Any — but not silence. Then peace will come to all our cities the war is destroying — Chernihiv, Kharkiv, Volnovakha, Mariupol and others. They are legends already, but I have a dream of them living — and free, free, like you on the Grammy stage.

Zelensky had reportedly been in talks with the Academy of Motion Picture Arts and Sciences to make a video appearance during last week's broadcast of the Academy Awards, but that idea ultimately didn't go forward. Truth be told, the president of the war-torn nation addressing a room full of vapid entertainers about such a serious situation as the war in Ukraine felt strangely out of place.

All in all, the Grammy's wasn't the sort of woke mess it's been in past years. The host and presenters chose instead to ditch the hectoring and kept it focused on musical performances. Perhaps the combination of sinking Democrat party poll numbers and low ratings in recent years for awards ceremonies was a wake-up call to this year's show organizers.