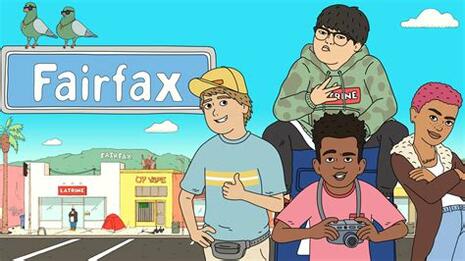 Fairfax is about a group of Los Angeles middle schoolers seeking social media fame. Straight out of the gate, the first episode pushes woke LGBTQIA ideology and continues with radical gender language throughout the series. One middle school character refers to her "dads" getting a divorce, again normalizing the absence of a biological mom and dad in family formation. Kids ask questions like, "What is your pronoun?" and school plays include a "gender-swapping rendition of Les Mis." Billy Porter, who has gained fame as a cross-dressing gay man, voices Hiroki Hassan, the influencer and trendsetter whose brand items Fairfax characters desperately seek to buy.

The show revolves around young friends Dale (Skyler Gisondo), Truman (Jaboukie Young-White), Benny (Peter S. Kim) and Derica (Kiersey Clemons). Derica is the proud left-wing activist of the show. Most shows geared toward adolescents nowadays have a (usually female) character who makes left-wing activism her identity and lifestyle. In the episode, "Fairfolks," Derika brags to an elderly union activist about how she and her friends unionized "against our parents". In that same episode, Derica talks about "Molotov cocktails" and how she wants to torch "Eric Garcetti's house." And when helping Dale run for a school election, she tries to harness the "spirit of AOC". She is also obsessed with climate change cultist Greta Thunberg. By the end of the series, Derica is FaceTiming with Thunberg.

While Derica's voice is female, her overall look is deliberately ambiguous and Dale tells his parents, "I'm not sure if she identifies as a girl." When Dale, a Boy Scout, mentions at a concert that he forgot his phone, Derica replies, "Gender neutral scout says what!" Derica also refers to God as "she."

Derica wears a "Brown as Fuck" button in one episode and has a BLM symbol on her social media. That connects with the overall race-baiting of the series. When we first meet Derica, a grocery store employee tries to remove her from protesting the salad bar area (she is against "milking almonds"), Derica tells him, "Why don't you take your cis white 'tude away from my protest, Chad." When pubescent Dale says his "life is over" after a setback, his black stepmother tells him, "Oh, your life ain't over, honey. You're white. You're gonna get a million second chances." But the worst moment is when Dale's black friend, Truman, tells him, "You're the first white kid I ever liked, Dale." Imagine if that sentence had been replaced with any other group. Why is racism okay if the kid in the show is white?

The leftist virtue signaling is relentless. The series promotes the abortion giant Planned Parenthood when a middle school influencer with a huge following makes a "charitable" donation to Planned Parenthood. An episode shows graffiti with the words "kill all landlords." And a student accuses Dale of wanting to take women "backwards" for suggesting a "1950s day" at school.

As Variety wrote, the series is "more depressing than funny." It is just the latest in the endless parade of forgettable woke Hollywood brainwashing trying to be relevant to adolescents. For all its Gen Z pandering, however, Variety noted, "the age of the “Fairfax” characters may not be habituated to sitting down and watching an eight-episode TV series." Let us hope this ends up as just another low-rated Hollywood fail.

You can fight back by contacting Amazon about promoting this content.