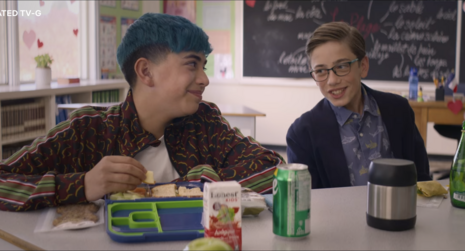 Gay male middle schoolers, communist rhetoric and advice to finish homework before you "summon the devil." Welcome to season two of Netflix's The Baby-Sitters Club, released on October 11.

The Baby-Sitters Club, like so much in this era of cultural decline, takes a nostalgic, decades-old franchise and makes it irritatingly woke. This reboot's only legacy will be as another nail in our country's cultural coffin.

Last season had the girls babysit a trans child. That child is not in this season, but the series is definitely working overtime to cover the other letters in Gay Inc.'s alphabet soup. In the episode, "Mary Anne and the Great Romance," middle school student Mary Anne (Malia Baker) spends school lunch in a "couples lounge" (a ridiculous idea for middle schoolers) with her new boyfriend, Logan (Rian McCririck). The dating couples at the table include two gay boys who act so in love.

At the end of the episode, Mary Anne tells her friend Dawn (Kyndra Sanchez) that she and Logan have decided to stop officially being boyfriend and girlfriend because the label feels like too much pressure. Dawn tells her, "I hate labels. For all I know, the person I end up with could be anywhere on the gender spectrum." This is how 13-year-olds are supposed to imagine their future romances now.

That episode covers the "G" and the "B" (or whatever other letters are in the "gender spectrum") of LGBT, but later episodes makes sure to have a teenage character who is an "L."

Janine (Aya Furukawa), the older sister of babysitter Claudia (Momona Tamada), has a high school friend named Ashley (Kelcey Mawema). Janine and Ashley have a great friendship in which they naturally click despite different personalities. In Hollywood scripts today, two female characters cannot merely be close friends. One-on-one same-sex friendships are obsessively sexualized on television since the legalization of same-sex marriage. So, naturally, in the second-to-last episode of the season, Janine tells her little sister that she and Ashley are "in love." The L is now covered in the season and old-fashioned friendships take another needless hit from the cultural commissars.

Ashley is a left-wing social media influencer who made a speech at the "New Haven March for our Lives," an anti-Second Amendment movement. But it is babysitter Dawn who is the series' most vocal spokesman for leftist indoctrination. You are never going to see a Hollywood-produced show with a "cool" young kid into conservative causes like pro-life activism or gun rights. No, Dawn advocates communistic ideas. She is "anti-capitalist", believes in "socialism" and criticizes corporations (but not for their wokeism or involvement with communist China). She does not "know if she really believes in the institution of marriage" but has a "love is love" t-shirt in support of gay marriage.

She even claims a white baby won a costume contest against two minority babies because of "white mediocrity superseding the excellence of two women of color." To make sure radical feminism is covered, Dawn also complains that "men have such fragile egos". And, of course, she is into occult practices just like her hip mother. "Okay, just, you know, finish your homework before you summon the devil," her mom's boyfriend advises her as Dawn works at a table with candles and tarot cards in her room.

As a general rule of thumb, you can presume that any original programming on Netflix targeted to minors should be avoided. Incredibly, this series is rated TV-G. The American left is working overtime to corrupt a vulnerable young generation into radical ideologies of Marxism and sexual confusion. Shut the streaming service off and find an alternative for your kids.