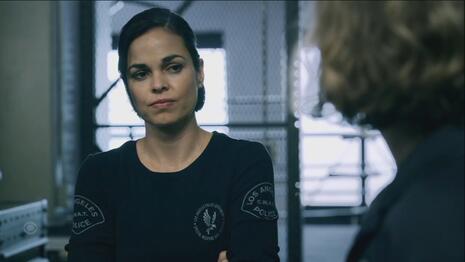 How dare society expect an elite group of police officers to meet rigorous physical standards! Or so says this week's episode of CBS's S.W.A.T.

In the episode, "Sentinal," on Friday, October 22, S.W.A.T. member Christina "Chris" Alonso (Lena Esco) is upset that the year's applicants list for the SWAT Academy has no women. She talks to Nora Fowler (Norma Kuhling), a female officer who pulled herself from consideration, to find out why.

Fowler: I was interested, but I decided not to take the risks that come with trying out.

Alonso: What do you mean?

Fowler: I took a closer look at the swat training and fitness standards. Not only are they out of date, they're biased in favor of male cadets.

Alonso: You've got the skills and drive to get past all the boys' club nonsense.

Fowler: This isn't a willpower issue. It goes deeper than that. And I'm not the only walking wounded. You know Officer Park, North Hollywood Division?

Fowler: She tore her rotator cuff trying out for one of the swat PFQs.

Alonso: A cadet had the same thing happen when I was training for SWAT.

Fowler: Swat PFQs put a ton of emphasis on explosive strength. Push-ups, pull-ups, box jumps... Are all exercises proven to put women at a physiological disadvantage.

Alonso: Nicki was worried about the push-up portion. She was training so hard for it, she got hurt.

Alonso: What if we can change that?

Fowler: Good luck. In the meantime, I got to watch my own six.

Is the audience really supposed to pretend that high levels of "explosive strength" are not a critical aspect of police work, especially on a SWAT team? Is it now wrong to expect candidates to have the capacity to, say, subdue a hostile male suspect? Gender politics has been lowering physical standards in numerous fields requiring levels of strength associated with males in the aggregate. The reduction has been happening in both the military and law enforcement.

"Look, I'm all for improving and expanding our training and recruitment, but let's be honest. We can't just simply lower the bar for female officers," cadet trainer David 'Deacon' Kay (Jay Harrington) later tells Alonso. "I've never had to get into a push-up contest with a suspect before," Alonso replies.

Push-ups are a critical measurement of upper body muscle strength. Upper body strength is very important when grappling with a potentially hostile or aggressive suspect. Nonetheless, Deacon eventually gives in to Alonso's concerns and alters the physical requirements for female cadets. Gosh, I am sure that will make the team so much more effective.

Also during the episode, SWAT had to take on a suspect who was stealing insulin shipments for his daughter. The episode detailed the prohibitive cost of vital insulin treatments. It left out the fact that Trump had lowered the cost of insulin treatments to low-income patients and the Biden administration inexplicably halted that order.

In a new twist, this season of S.W.A.T. has finally recognized that Latino officers are in important positions in the Los Angeles Police Department. Unfortunately, it did so by introducing a Hispanic lieutenant who is trying to get a black man fired.

Last season, the year of endless BLM scripts, Daniel 'Hondo' Harrelson (Shemar Moore) went to the media about some racist cops who had not been removed from the force. Higher-ups in the LAPD are still not happy about it. They installed a new head of the S.W.A.T. team, Rodrigo Sanchez (David DeSantos). It turns out Sanchez is really there to find a way to get Hondo to quit the force.

Sanchez: I am not the architect of this plan. I'm just the tool.

Hondo: You know what? You're damn right, you are a tool. You are a brown man coming after a Black man for calling out racist cops. That don't make no kind of sense.

Sanchez: This has nothing to do with race.

Sanchez: You are a cop who went outside the chain of command. Now they're gonna use you to make an example for everyone to witness.

The left is losing Latinos and now they are portraying them as "tools" of an inherently racist white system. Vilifying Latinos along with white people is a strategy, I guess.

Apparently, leftists do not like it when their intersectional fantasies do not comport with reality. It will be interesting if Hollywood pushes more Latino "tool" narratives as Hispanics increasingly reject the Democrats' agendas.

This rant was brought to viewers in part by Progressive, Neutrogena and Charmin. You can fight back by letting these advertisers know what you think of them sponsoring such content.