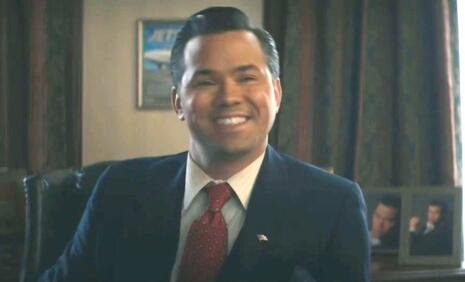 Republicans are bigots who like killing baby ducks at NRA events, framing people for assassination attempts and do not worry about reality. So says the unwatchable Showtime "comedy" Black Monday, set in the late 1980s.

In last week's episode, Blair Pfaff (Andrew Rannells), a fictional adulterous and closeted gay Republican congressman, was shot in an attempted assassination. After surviving the shooting, he woke up in his hospital room to discover the attempt on his life had made him popular with the public.

Werner: It was Dick Cheney's office before he became Secretary of Defense.

Blair: Wow, if these walls could talk.

Werner: They wouldn't dare. Cheney had the wallpaper made from NDAs.

Blair: [Laughs] Word. Well, looks like the RNC is a fan of rn-me.

Werner: Play your cards right, and you could nab the VP slot for the next presidential campaign. You've got all the right players behind you. Baby boomers...

Werner: Yes, sir, as well as Big Jesus, Big Pharma, and Bigots United. The only part of the conservative coalition you haven't nailed down is the NRA.

Blair: What? But I was shot and I didn't blame the gun.

Werner: Don't worry, their annual shoot-a-thon is tomorrow. It's NRA president Charlton Heston's signature event. He autographs the spent shell castings. So, you know, you just have to go there and--

Werner: That was last year's competition, sir. This year, it's baby ducks in a pond. And once Heston's signs off on you, the sky's the limit. Not for the baby ducks, of course.

Blair: Of course. Now, speaking of shooting adorable babes, where are we on who shot me?

Werner: They're zeroing in on a suspect. We should have a name for you just as soon as we finish the focus groups.

Werner: Well, the RNC has been workshopping a few options. A Greenpeace-loving activist, a lesbo... -

Blair: Okay, cool. But what about who actually shot me, like, in reality?

Werner: Stop worrying about reality, sir. You're a Republican.

In the period in which the show is set, Democrats cared so much about reality that they pretended guys like Ted Kennedy and Joe Biden (and later Bill Clinton) cared about women. Back then, they insisted that Reagan, now lauded as one of the greatest presidents of the 20th century, was really dumb and senile. They pretended, and still pretend, abortions were "reproductive health." Sure, Democrats just love reality.

Republicans have no problem acknowledging all sorts of realities that Democrats have denied for decades. For example, unborn babies are human beings and gun control does not stop murderers from getting illegal weapons (although it does hinder self-defense). Also, all human beings are created equal and race-baiting is a bad thing. To the left, refusing to divide people by color makes Republicans "bigots."

But, of course, like most Hollywood shows, Black Monday is written by leftists. Therefore, it is reflexively anti-Republican, hedonistic, anti-Christian, and somehow still obsessing about Dick Cheney.