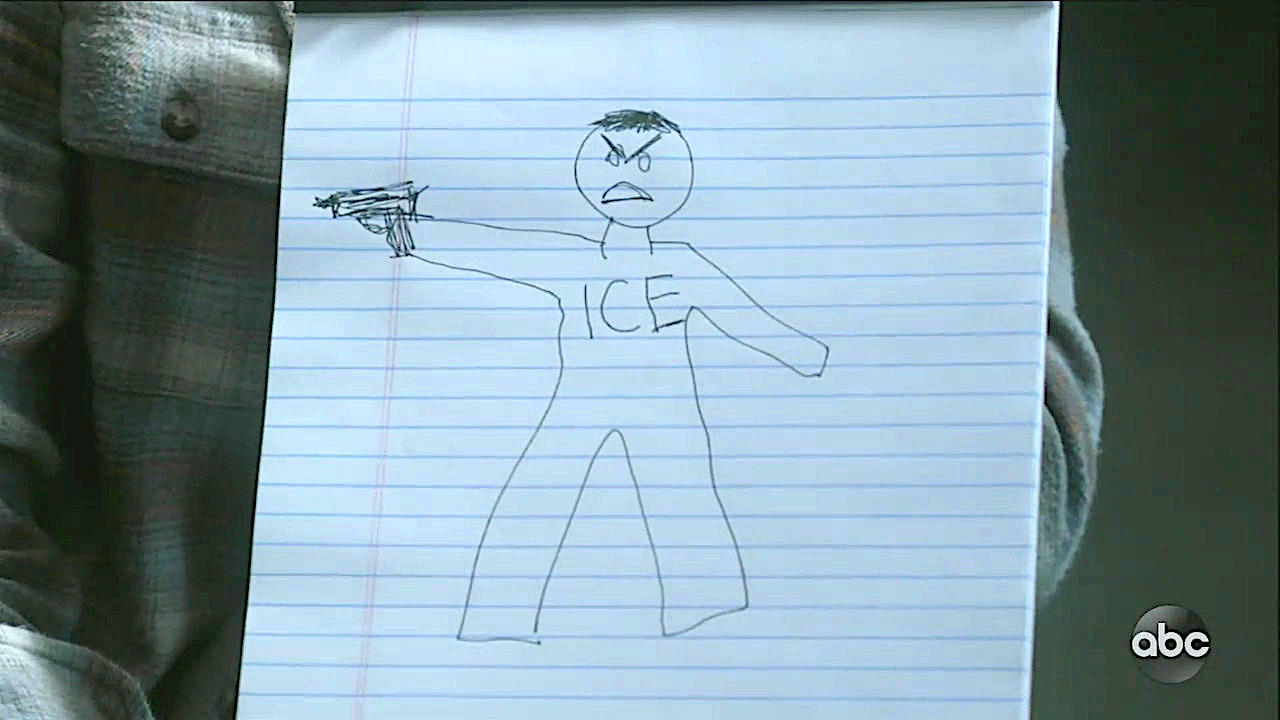 ABC’s How to Get Away with Murder tends to push a left-wing agenda. The final season’s second episode on October 3, “Vivien’s Here,” went over-the-top in lecturing audiences about immigration enforcement.

Third year law students Asher and Connor are assigned to a case involving an illegal immigrant child seeking asylum. When they meet with the little boy, Hector, they ask him through a translator if he has experienced any gang violence, hoping to make it the basis for their case. The translator asks Hector if he came here to escape “bad people in his country” who scared him. With a sketch pad, Hector draws an angry ICE agent with a gun. Asher says, “We got a gang, just not the right one.”

The show not only compares Immigration and Customs Enforcement agents to criminal gang members, it also compares illegal immigrants willingly crossing our border to U.S. citizens of Japanese heritage forcibly interned during World War II. In a later scene, Connor causes Hector to react traumatically to a fake ICE agent through a courtroom stunt. He references the U.N. Convention on Rights of Children to claim that Hector is subject to torture in the detention centers and the Supreme Court case of Korematsu v. United States to claim that conditions are "morally repugnant."

Judge Bines: Mr. Walsh, may I suggest a recess?

Connor Walsh: That's not necessary, Your Honor. This man is not a real ICE agent. Hector's reaction, however, is very much real.

Prosecutor Ford: Or you coached him!

Connor: How? Hector can't even talk due to the trauma that he's suffered inside the detention center.

Judge: Ms. Price, were you part of this charade?

Connor: No, Your Honor, this was my idea to illustrate the horror of my client's inhumane living conditions. His living conditions are not at issue here. Article 37 of the U.N. Convention on Rights of Children demands -- "No child shall be subjected to torture." By that standard alone, my client deserves asylum.

Prosecutor: ...to secure our borders.

Judge: Eh, the Supreme Court also made clear that that those standards are not binding.

Price: Just last year, the Chief Justice wrote that the internment of Japanese Americans in World War II was "Morally repugnant." Look at this boy. Can you honestly say that the conditions we have him in are not morally repugnant?

Prosecutor: Your Honor, the Chief Justice's remarks were about Korematsu, a case that has never been overruled.

Price: Let me quote the Chief Justice. "Korematsu was gravely wrong the day it was decided, has been overruled in the court of history, and has no place in law under the Constitution."

Connor: We're talking about rounding up innocent children on American soil and caging them behind barbed wire. How is that any different than what we did to the Japanese?

Connor: At least six non-American children have died in the custody of ICE –

Connor: And I refuse to wait for my client to die...

Connor: ...Due to the neglect and cruelty that he is suffering at the hands of the American Government!

Judge: I agree with you, Mr. Walsh! And while no one has ever had the creativity to invoke these precedents, I cannot allow them to decide this case.

Judge: What I can do is issue a continuance based on your client's mental state. Ms. Ford, please coordinate with the Office of Refugee Resettlement to place him in foster care.

Prosecutor: Your Honor, there's no legal standing for this.

Judge: Unless you can argue a legal justification for the torture of children, you've lost.

In order to manipulate the audience, the show disingenuously leaves out the full context of Chief Justice John Robert’s quote, which upheld President Trump's so-called Muslim travel ban. “Whatever rhetorical advantage the dissent may see in doing so, Korematsu has nothing to do with this case, The forcible relocation of U. S. citizens to concentration camps, solely and explicitly on the basis of race, is objectively unlawful and outside the scope of Presidential authority,” Roberts wrote. “But it is wholly inapt to liken that morally repugnant order to a facially neutral policy denying certain foreign nationals the privilege of admission.”

One wonders why the writers of this show even believe illegal immigrants should want to come to the United States. After all, in a separate subplot, another character in the episode says of her inmate father, “He's a man, not a file, even if America doesn't want us to know the difference.” Her comment is just another throwaway line in the show’s ongoing tendency to knock the United States as a horrible place.

Connor later tells his law professor, Annalise Keating (Viola Davis), that he thinks he can get the boy legal status because he found his mother, Marisol. “They got separated at the border. So we get Marisol to testify for him, right? I mean, she can speak to the gang violence back home.” Annalise replies, “You can't ask her to do that…because ICE uses kids like Hector as bait to arrest undocumented parents.” Meanwhile, left-wing activists and writers use kids like Hector as props to promote their own agenda.