Curt Schilling never held back on the mound, and apparently will not do so at the keyboard either. Though, this time Schilling’s daring will hurt his career instead of helping it.

According to the New York Daily News:

In another controversial move in a career filled with controversy, Curt Schilling, the former pitcher and the network’s Sunday Night Baseball analyst, paid the price for posting a tweet Tuesday equating Muslims with Adolf Hitler.

ESPN removed Schilling from its Little League broadcast team following the tweet, saying in a statement Tuesday afternoon that they had removed Schilling and implied that further action could be taken “pending further consideration”:

"Curt's tweet was completely unacceptable, and in no way represents our company's perspective. We made that point very strongly to Curt and have removed him from his current Little League assignment pending further consideration."

Here is what Schilling tweeted: 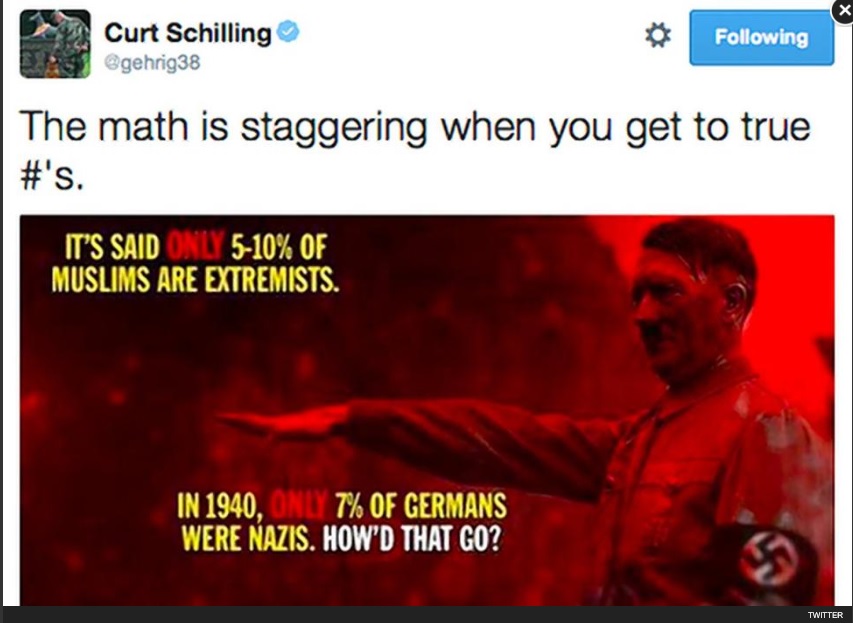 Schilling deleted the tweet quickly after he posted it, though not before it was screen-grabbed for all to see.

Schilling later tweeted that he accepts his suspension: "I understand and accept my suspension. 100% my fault. Bad choices have bad consequences and this was a bad decision in every way on my part."

Schilling may understand the reasons for his suspension. Yet, they remain a mystery to me. There is nothing factually inaccurate with the message of the tweet. It in no way compares “Muslims” to Nazis. It compares the number of Muslim “extremists” to the number of German extremists, with the point being that whether you accept the math or not, extremists need not have a numerical majority in any one country or religion in order to take control, and create catastrophic results for the rest of the world.

Which, is absolutely true.

But of course, truth is always the first casualty.