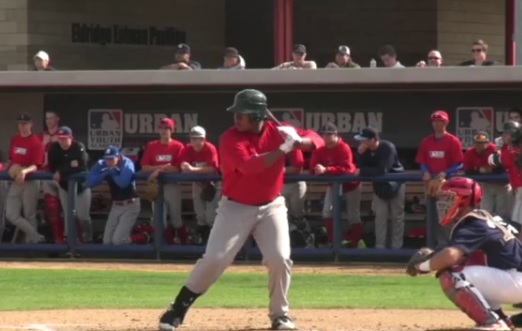 In a stunning coincidence of epic proportions that no one could have possibly seen coming, ESPN has found another gay professional athlete less than three days after Michael Sam’s announcement that he is walking away from football.

This most recent out-of-the-closet jock comes to us by way of baseball. David Denson, a minor league first baseman in the Brewers organization, recently came out to his teammates, a process he explained in the ESPN article:

“Talking with my teammates, they gave me the confidence I needed, coming out to them,” Denson told the newspaper. “They said, ‘You're still our teammate. You're still our brother. We kind of had an idea, but your sexuality has nothing to do with your ability. You’re still a ballplayer at the end of the day. We don't treat you any different. We've got your back.’

“That was a giant relief for me. I never wanted to feel like I was forcing it on them. It just happened. The outcome was amazing. It was nice to know my teammates see me for who I am, not my sexuality.”

Of course, ESPN greeted the news (if you can call it that) with happy talk about “inclusion” and progress. Commentator Buster Olney enthused that, “The fact that Denson speaks in this way of how his teammates responded to him really is something very positive about where we are in 2015.”

It also says something positive about where ESPN is in its campaign to force sports fans to care about LGBT stuff. Michael Sam crashed and burned (with a big assist from ESPN and others), but look! Eight minutes later they’ve discovered a new LGBT champion in sports.

It’s also suspect from Denson’s side. According to the article:

Those numbers are pretty awful. Hitting anywhere between .195-.245 in different levels of A-ball (the lowest level of minor league ball) normally means you’re a few weeks, maybe a month or two, from being released.

Could that be the reason why Denson decided to come out, believing that his announcement would make it politically impossible for the Brewers to release him? I have no idea. But how many minor league first basemen get articles in ... Slate? And there’s precedent for that. Remember that the NFL called several teams, urging them to sign Michael Sam after the Rams cut him, to prevent a media/PR backlash.

Is it too far-fetched to believe Denson would want to repeat that recent history now?

I wish it was.