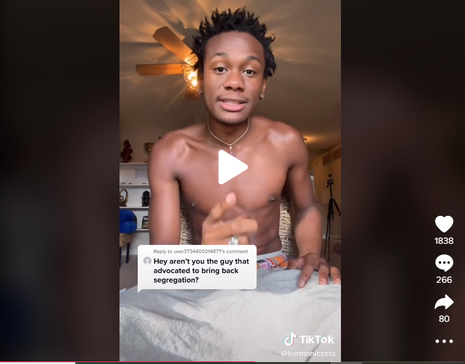 Woke liberals would have us believe that white racism is a serious threat in America. While it’s absolutely wrong, of course, we as a country are pretty united on denouncing it whenever and wherever it appears. Find a racist post toward people of color on social media, if you can, and watch how fast it comes down. Now do the same with a racist post toward white people and watch how long it stays up.

Racism toward white people (which is not "reverse racism."  The reverse of racism is acceptance, tolerance, kindness, etc.) is not only on the rise, but also tolerated and accepted. Watch any racial-based sitcom, for example, and you'll quickly see how many racist, anti-white jokes get a laugh and a pass.

BLM and CRT sentiment only feed this type of hatred, and it’s only going to get worse. A recent tweet from Libs of TikTok exposed exactly what happens in a post-BLM, CRT culture via a video of a young, black man with the name karmoniczeta who believes white people are “devils":

Before you dismiss this as just some random, one-off racist, consider that he has 239.5k followers and many disturbing comments supporting his hatred. There was even a teenager who thanked him and said she’s learned a lot from him.

This isn’t just one video, either. Consider these other delightful rants. (Warning: vulgar language)

There are more shockingly hateful claims in those videos and others on his account if you have the time and stomach to watch them in full. The mere fact this account hasn’t been taken down speaks volumes alone. Again, this is a very popular TikToker with many followers, likes, etc. He was even recognized on the street by a fan. He tells the fan that blacks are going to take over the world and the fan replies, “It’s already started. That’s why they mad.”

White people aren’t mad at the notion of black people taking over the world. They’re mad that hateful, racist monsters like this guy are trying to take over the world.

And every time the mainstream media, woke Hollywood, and SJWs convince people of color that white police officers are “hunting” them, that white people want to oppress them, and that all white people are racist, it’s only going to lead to more of this hate if people of all colors don’t join together and push back.