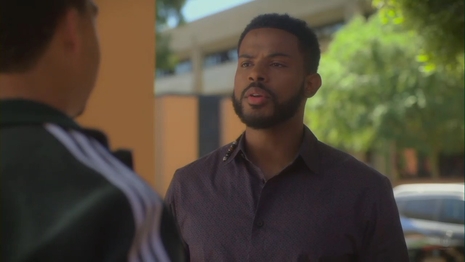 Freeform’s racist comedy and black-ish spinoff, grown-ish, has unfortunately returned for a fifth season, but the show has been revamped with a mix of new and old characters, now that main character Zoey (Yara Shahidi) has graduated from California University (Cal U), where the show is set. What hasn’t changed, sadly, is the show’s hatred towards white people and conservatives as evidenced in its latest episode.

Kiela (Daniella Perkins), whose character debuted last season, has returned in a more vital role. In Wednesday’s episode, “Look What U Started,” she and newcomer Brandon (Matthew Sato) are both trying out for a position with Cal U’s Social Justice Society (SJS). Before their interviews, they get into a virtue-signaling debate about who's more worthy for the position - a “blossoming anarcho-Marxist” or a freshman who was on Biden’s transition team:

Brandon: What's up, Kiela? You interviewing, too? We met at the SJS meeting, right? Uh, you made me prove to you that I wasn't subscribed to Ben Shapiro before I put my name on the sign-up list.

Kiela: Sorry, you're interviewing for director of strategy for the social justice society?

Brandon: Yep. Yeah, I gotta say, I'm surprised a blossoming anarcho-Marxist like yourself is interested in something this...institutional.

Kiela: Okay, look, if you need, like, a résumé-padder for your Peace Corps app, there's like a thriving hacky sack club on the east quad. And, you know, just a...an FYI, they've never given this position to a freshman.

Brandon: Oh. Well, how often do they meet a freshman who was on Biden's transition team?

Interviewer: Kiela. Come on in.

During the interview process, it’s revealed that Kiela and Brandon are complete opposites in their approach to obtaining their goals, which leads to them both being hired, after Kiela calls former president Ronald Reagan a “genocidal clown":

Kiela: Making change is about getting people to stop and pay attention.

Brandon: Look, we all know the levers of change are pulled by like five old white dudes in a smoke-filled room. So, the question is...

Both: How do you get them to listen?

Brandon: Work behind the scenes toward concrete, achievable goals.

Kaden: I'm writing my thesis on activism during the AIDS crisis. And do you know what my biggest takeaway has been?

Kiela: Reagan was a genocidal clown?

Kaden: You need the act up die-hards handcuffing themselves to the stock exchange, and you need the HRC insiders lobbying senators. Do you see what I'm getting at? Your tactics couldn't be more different. Which is why you'll make incredible co-directors. Congratulations.

Another returning character is Afro-Centric professor Aaron Jackson (Trevor Jackson), boyfriend of Zoey. As a refresher, Aaron is the one who said, “white people are inherently bad,” that it’s okay for black people to lie about having a felony on their resume because, “the system is designed to work against people of color,” and that conservatives are “idiots” who support policies that oppress black and poor people.

In this episode, Aaron makes a viral TikTok complaining about how many white people are on the school’s faculty, mocking them on looks alone with critiques such as, “a few tiki torches shy of a hate crime,” and having a “’60s country club whiteness":

Aaron: Hey, how you guys doing? Professor Jackson here, and today I'm gonna be rating Cal U's faculty diversity by department. That's a few tiki torches shy of a hate crime. Zero out of 10. Now, you see that? That right there, that's giving '60s country club whiteness, but there are some ladies in the mix, so we'll give them a 2 out of 10. It's not great, but it's better than the last one. Now, finally, see that? There's that Benetton Energy we've been looking for. You're probably wondering what department that is. Is that history? Film studies? No, it isn't. It's global studies, guys. Global studies. And you see that guy right there in the corner? That's me, next to all my friends that Cal U panic-hired over the last six months.

Junior: At first, Aaron's TikTok flopped, until one student saw the comic potential and used Aaron's sound for his own riff...

Aaron: Zero out of ten.

Junior: Rating the lack of seasonings at various dining hall stations. When it blew up, suddenly students started using Aaron's sound to call out everything problematic at Cal U. So, after Aaron forgot about his scream into the social media void, it popped off, too. Yo, bro. Congrats on sticking it to the man.

Aaron: Thanks? What...what are you talking about?

Junior: Your TikTok. It blew up. Check out the comments.

Junior: Looks like people are psyched to see professor TikTok in action. I guess so.

The professors end up angry at Aaron after seeing the video, leading Aaron to complain to Zoey about the tension. Zoey encourages him to make amends, advising, “If you want people to be on your side, you're gonna have to win them over a little bit. Show them that you’re one of them.”

Aaron decides to take her advice, but when he goes to mingle with the white faculty, he has visions of them as vapid and rude borderline racists and thus decides he can’t bring himself to associate with them:

Aaron: Okay, okay, it's just drinks. Drinks with coworkers. That's all it is. Zoey's right, just bring the charm. Show them what you're all about. It's not ass-kissing, it's career development. Big difference. How bad could it be?

Man: Where'd you get that tie? It's so dope!

Man 2: What I love about Kamala is she's so real.

Haha? black-ish may finally have ended its reign of racist “comedy,” but it looks like its legacy will unfortunately live on through grown-ish for the unforeseeable future.

Conservatives Fight Back! This episode was sponsored by Olive Garden, Walmart, and GEICO. Click each advertiser for their contact information so you can let them know how you feel.