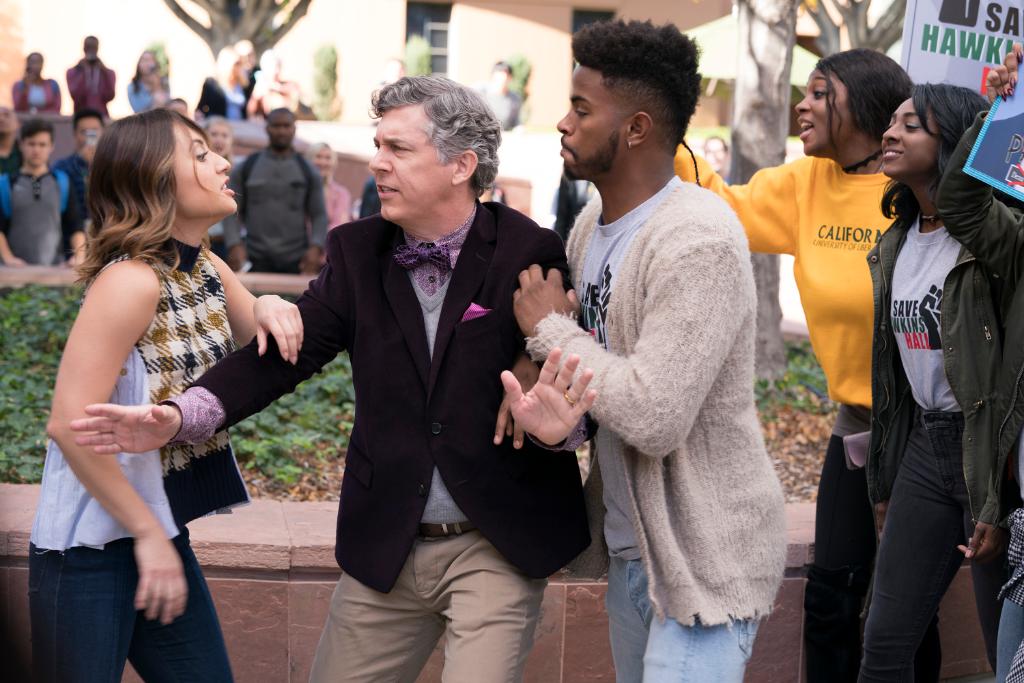 The left often claims to be the “party of tolerance,” but proves time and again that their tolerance only extends to those who agree with them. Such was the case with Wednesday’s episode of grown-ish, “Safe and Sound,” on Freeform which dealt with safe spaces on college campuses and whether conservatives, who supposedly believe in “idiotic polices” that “oppress” blacks and the poor, deserve a safe space of their own.

The opening montage alone, which was voiced over by main character Zoey Johnson (Yara Shahidi) was enough to make a conservative’s skin crawl. The show is a spin-off of ABC’s comedy black-ish and centers around Zoey’s life as she navigates into adulthood and college.

Zoey: Every generation is known for something. Gen X gave us MTV, "Friends," and the "First black president."

Song: ♪ We don't believe you 'cause we the people ♪

Song: ♪ All you black folks, you must go ♪

Zoey: Which is part of why we love our safe spaces.

Song: ♪ All you Mexicans, you must go ♪

Zoey: Safe spaces -- a place where like-minded kids can go to be themselves, talk, and just relax without the fear of being judged, criticized, or triggered.

Zoey: Sometimes those safe spaces can feel a little... not-so-safe.

Song: ♪ All you bad folks, you must go

Next, we see Zoey dressed in military-style clothing explaining that she looks “like Che Guevara in Timberland heels” because she’s “getting ready to resist The Man.” She explains that Hawkins Hall “has been a safe space for black Cal U students for years, but apparently some non-black students felt a little threatened at this party last weekend.”

There were two incidents that incited complaints and created threats of lawsuits, one where a black student yelled, “Eliminate the blue-eyed devils,” and another where a black student asked the D.J. to play, “Fuck the Police.” In both instances, two white students were in attendance and the writers made them into vacuous, clueless-looking idiots.

Aaron encourages her and says, “But look, black and brown, we've gotta stick together. That's why I'm always down to help out the Latina cause.” Anna then corrects him, saying that she’s talking about her “other people – women on the right.”

Aaron is incredulous and asks, “Wait, so you want a safe space for Conservatives?” When Ana confirms that’s what she meant, Aaron quickly turns on her, saying, “Your slogan should be ‘Get the hell out of here.’”

Ana: Wait, so you were fine with me fighting for a Latina safe space, but not one for Conservatives? –

Aaron: Yeah. You don't need a safe space. Your safe space is Congress.

Aaron: Oh, my God. I love that restaurant. It's, like, why? Anyway, the point is, everywhere I go in America, I feel like I'm at a NASCAR race. So, I actually need a safe space.

Ana: Well, I'm not feeling very safe right now, because the second I said "Conservative" you jumped down my throat!

Aaron: You know what? I'm sorry. I just kinda got distracted because we're talking about a group of people who think tiki torches are appropriate protest gear.

Ana: Hey, I am not alt-right. And maybe you'd know that if you bothered to listen to me.

Aaron: I am listening to you. But how can a Latina woman even be a Republican?

Ana: Because I believe in a lot of their policies!

Ana: Actually, big government oppresses people, and California is the worst. Did you guys know that we basically have no concealed carry here?

Nomi: I just realized how fun-crazy you are.

Aaron: A gun escalates any situation, and you wanna arm a bunch of idiots? That -- that makes sense.

Aaron: Well, you may not be an idiot, but you believe in policies that are idiotic.

Ana: Okay, and see? This -- this right here is exactly the reason why I need a safe space. 'Cause for some reason Conservatives are the only group that it's okay to openly hate on. We're like the most oppressed group on campus.

Aaron: You are not more oppressed than the black man. That I can promise you.

Nomi: Uh, I don't know, dude. I don't think anybody is more oppressed than the gays.

Nomi: And don't even get me started on my other people -- the Jews.

Nomi: My people have dealt with a lot of oppression!

Zoey: Can't all atrocities just get along?

When Ana argues, “Look, all I'm saying is if safe spaces are a good thing, why can't my group get one,” Zoey agrees and asks, “How do we decide who gets a safe space?” Aaron’s tolerant, open-minded reply? “It’s easy, okay? Everyone but her.”

Later, Zoey discusses the controversy with ex-boyfriend Luca (Luka Sabbat) who tells her, “All a safe space is is a bunch of people sitting around agreeing with each other.” Zoey argues, “It's a place to go to feel comfortable.” Luca retorts, “But that's the thing -- people need to get comfortable being uncomfortable.”

Luca’s wise words have a profound, albeit temporary, effect on Zoey. “After talking to Luca, I started to think maybe he was right,” she tells the camera in a voiceover during the protest. “My generation was so afraid of being judged, criticized, and triggered, but was it helping us? Maybe we all needed a little more discomfort.”

Ana shows up at the protest but is there to fight for her right to a safe space, holding a sign that reads, “Safe Spaces for One, Safe Spaces for All,” while the other protestors shout, “Save Hawkins Hall! Black Dorms Should Matter!”

Aaron accuses Ana of trying to destroy the protest and tells her she has no right to be there, but Ana disagrees and shows him her permit. She thanks him for advice he gave her to come up with a slogan when he thought she wanted a safe space for Latinas and tells him her slogan is #YesAllSafeSpaces and #yass which is trending on Twitter.

Aaron quips back, “What a surprise. You know, you're profiting off my work. Historically that's what Conservatives have always done, so you're on the right track. Good job.”

After more back and forth, Aaron and Ana then begin a physical altercation leading the dean to intervene.

Zoey says in a voiceover, “As Dean Parker tried to keep Ana from going all Sinaloa on Aaron, things were getting out of hand with the rest of the crowd, and somehow in our fight to feel safe, we turned this whole campus into a war.”

The dean calls Ana and Aaron to a meeting in his office and tells them he’s fielded 142 complaints of feelings getting hurt, including one of his own, and that the campus is littered with trash, damage from three fires breaking out and that their “voices got in the way of student safety.”

He decides to disband Hawkins as well as the LGBT, international and athletic dorms. When Ana tells Zoey that this outcome wasn’t her intention at all, Zoey argues, “You incited an actual, physical riot.” Ana points out that she was just exercising her right to free speech, to which Zoey angrily replies, “Can you please stop spouting these political buzzwords? I'm trying to tell you that real people got hurt.”

Ana puts Zoey in her place though with her strong comeback. “Real people get hurt when they don't have their rights. My grandpa has been in jail in Cuba for five years now because he said one thing the government didn't like. So, don't tell me that "Free speech" is just some buzzword because it is everything when you don't have it.”

Zoey apologizes and said she had no idea, and Ana argues that it’s because everyone judges her without hearing her first and they assume she’s an idiot. Zoey says in a voiceover, “The more I listened to Ana and how passionate she was about her beliefs, the more I realized things weren't always black and white. She's a Republican who believes in gay rights and climate change. She had some crazy ideas about e-mail servers -- but we had a lot more in common than I thought. All I needed was for Aaron to see that, too.”

At first Aaron is having none of it, but later, Zoey pulls Aaron and Ana over to a table with their other friends to try to make peace again. She tells Aaron, “Dude, you aren't the only one here who cares. And, you know, maybe if you weren't so in love with your own voice, you'd still have a dorm. Aaron, you are an asshole for not letting her have an opinion.” Then she turns to Ana and says, “And my dear, lovely, sweet roommate, you are an asshole for getting Hawkins closed.”

Zoey then goes to plead with the dean to reconsider his decision to close Hawkins and the other dorms. He tells her he won’t change his mind until everyone can learn to coexist peacefully. Zoey pulls the blinds up on his window and tells him to look outside. 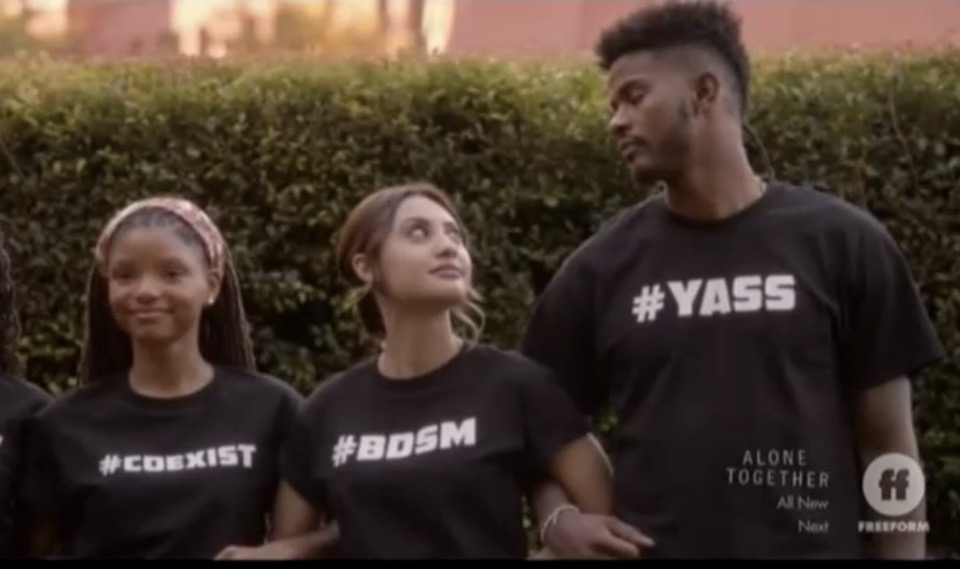 So, all’s well that ends well? Not really. If the writers made Ana a conservative who didn’t share any of her liberal friends’ beliefs, I doubt they would have had their other characters welcome her into their fold.

And what happened to safe spaces being ridiculous because these students need to learn how to deal with being uncomfortable? That lesson apparently disappeared into a liberal abyss.